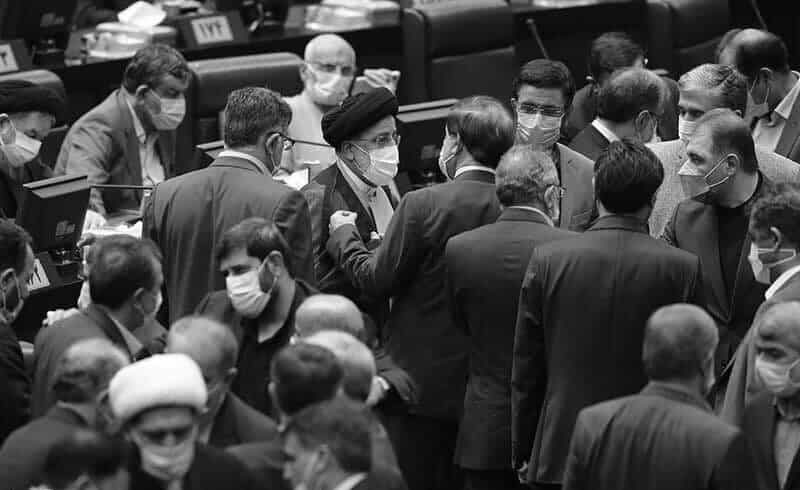 In March 2020, during the regime’s sham parliamentary elections, the Guardian Council began to sideline the so-called “reformist” faction in accordance with Supreme Leader Ali Khamenei’s orders. Khamenei wanted a parliament full of undisputed loyalists to pave the way for a major purge in the presidential election in 2021, during which he sought to install a “young Hezbollahi government.”

The explosive state of society had sounded all the alarm bells for Khamenei. He knew that the slightest rift at the top could hinder a swift crackdown on the looming uprisings. Warnings were given in advance that “officials should avoid destroying unity and unanimity” because the result would be the “fragmentation” of the entire system in the face of a population yearning for change.

It has now been five months since Raisi and his handpicked administration were installed to symbolize the “unification” of the entire establishment. But mounting crises are exposing widening cracks. Members of parliament attack Raisi’s cabinet every time a minister is summoned, warning the president about the consequences of his empty promises, increasing poverty, and the growing threat of a social explosion. The intensity of the infighting has reached a boiling point, forcing Khamenei to call the parties out in his speech in Qom on January 9. He warned the parliament and the government against “division” and “confrontation”.

It is clear that the intensity of the conflict is so serious that Khamenei’s behind-the-scenes efforts to contain it have gone unanswered, and now the helpless Supreme Leader has been forced to accept the scandal and the extensive associated losses, while publicly announcing the existence of a variety of “fronts” within his own faction.

One manifestation of this “division” and “confrontation” has emerged in connection with the Vienna talks. Ten months have passed since talks began but there is no realistic prospect of reviving the nuclear deal known as the JCPOA or lifting the sanctions.

There are now two major camps at loggerheads.

One camp includes the parliament speaker, Mohammad Bagher Qalibaf; presidential deputy for economic affairs, Mohsen Rezaei; the supreme leader’s senior advisor, Ali Akbar Velayati; and, other government officials. They emphasize that the economic suffocation and the severity of the danger of a social explosion have reached a critical mass and that there is no other way for the system but to “interact with the world” while submitting to the will of world powers.

The other camp is comprised of figures like Ahmad Alamolhoda, father-in-law of Ebrahim Raisi and Khamenei’s representative in Mashhad, along with Hossein Shariyatmadari, the editor in chief of the Kayhan daily, as well as some other ultraconservative voices who are said to be led by Mojtaba Khamenei, the Supreme Leader’s eldest son. They say that the explosive state of society is very serious and accepting the P4+1 terms will not solve the problem, but rather it will accelerate the regime’s disintegration. They add that such an outcome would aggravate the regime’s weakened position while encouraging the regime’s opponents and paving the way for enormous social unrest.

Ali Khamenei, who usually tries to appear non-partisan and avoids taking clear stances that might backfire, was forced to come out of hiding and instruct his own faction to avoid further antagonizing other factions. But as the regime is facing an increasingly united international community, a more unified Middle East region, and an all-time high determination of a restive society to bring about change, it’s just a matter of when, rather than if, the regime will ultimately collapse and be overthrown.