Nearly six months after shooting down a Ukrainian passenger jet, killing all 176 passengers aboard, the Iranian regime published a ridiculous report blaming an operator, who had “not obtained a license.” The publication of such a bogus report underlines the necessity of an independent international inquiry about this tragedy.

Reports indicate there have been numerous protests across Iran by people from all walks of life. These protests once again confirm that Iran is filled with unrest right now as people from all occupations take to the streets in protest over unfair treatment by the Iranian regime and its affiliates.

Workers from the Haft Tappeh Sugar Cane Company in Shush, southwest Iran, continued their strike for the 16th consecutive day on Tuesday, this time gathering outside the Shush governorate building.

Last week, Iran’s democratic Resistance movement won its latest victory in court against a media outlet that had chosen to repeat false allegations against Iran’s main opposition organization, the People’s Mojahedin Organization of Iran (PMOI-MEK). Despite the favorable judgement, the case itself is a reminder of the persistent nature of lies and rumors that are designed to politically damage the MEK and its parent coalition, the National Council of Resistance of Iran (NCRI).

A majority of members of the House in a unique bipartisan way, offered a comprehensive solution for threats stemming from the Islamic Republic of Iran. The Resolution is comprehensive: It corrects deficiencies in policy discussions of Tehran.It emphasizes that Iranians, having been “deprived of their fundamental freedoms,” are “opposing religious tyranny working toward the establishment of a new and democratic form of government.”

The resolution called attention to “Madame Maryam Rajavi‘s 10-point plan for the future. It calls for universal right to vote, free elections, and a market economy.

Maryam Rajavi: My deepest sympathies go out to the families of the victims, particularly the patients,who lost their lives in the catastrophic fire in Tehran’s Sina Clinic

My heartfelt condolences to all the people of Tehran. Wishing quick recovery of those hurt and injured in the fire.

My deepest sympathies go out to the families of the victims, particularly the patients,who lost their lives in the catastrophic fire in Tehran’s Sina Clinic. My heartfelt condolences to all the people of #Tehran. Wishing quick recovery of those hurt and injured in the fire. #Iran 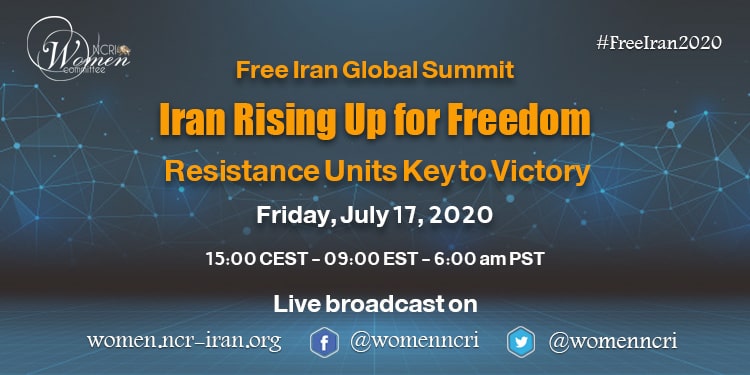 Every year, the Iranian Resistance holds its Free Iran annual gathering to beam a strong message of hope for regime change, freedom and democracy into Iran.

The event is a venue for tens of thousands of Iranians and supporters of the movement from around the globe as well as hundreds of renowned politicians, dignitaries, human rights activists, and parliamentarians from the five continents to declare their support for the people of Iran in their quest for freedom.

Continued reports of protests across Iran

Unrest is growing across the country as reports indicate people from all walks of life holding protest gatherings and rallies demanding what is rightfully theirs.

A group of workers in the Haft Tappeh Sugar Cane Company, located in the city of Shush in southwest Iran, continued their strike for the sixteenth consecutive day on Tuesday, June 30, protesting not receiving any answers to their raised demands. This rally was held outside the Shush governorate building. The protesting workers are demanding delayed paychecks and pensions, their job statuses being clarified, the company status finalized, all their expelled colleagues be allowed to return to work, cancellation of plans to hand over the company to regime insiders under the pretext of “privatization” and their insurance booklets being extended.

“We will not rest until Iran is free, down with Khamenei.”

“Onward to rebellion and uprising – a prosperous Iran, with Maryam Rajavi.”

During the past week, Resistance Units and supporters of the People’s Mojahedin Organization of Iran (PMOI/MEK) marked June 20, 1981, the beginning of the Iranian people’s Resistance against the ruling religious dictatorship, and the day of martyrs and political prisoners.

Ebrahim Raisi, head of the so-called judiciary in Iran:
We need to clarify between security crimes & political crimes. We need to differentiate between protests & unrests.
The issue of disrupting security and social order should not be allowed.
Raisi is known for his direct role in the 1988 massacre of over 30,000 political prisoners, mostly MEK members & supporters.
Iranian regime Interior Minister Abdolreza Rahmani:
The gasoline riots [Nov. 2019] were the result of various issues. This is not the right place to discuss it.
Majlis member Hossein Maghsoudi:
I am witnessing the people’s wrath against us.
Majlis member Ahmad Alireza Beigi:
The country’s economy is in ruins… We are witnessing growing dissent.
State-run Jamaran website:
Iran On the Verge of a Revolution
State-run Erja News commentary:
It has been two years that we have witnessed the MEK awakening thousands of their sleeper cells through a central command, describing them as Resistance Units and delegating missions, for operations and destruction.

Wednesday, July 1, 2020, marks the 229th day since the beginning of the nationwide Iran protests.

Previous articleCommemoration of June 20 Anniversary – Activities of the Resistance Units and Supporters of the Mujahedin-E Khalq (MEK/PMOI) Across Iran
Next articleIran: Despite Successful Legal Challenges, Disinformation Persists About the MEK

******* THE CONTENT OF THIS PAGE WILL BE UPDATED WITH THE LATEST NEWS UPDATE: 10:30 AM CEST Iran: Coronavirus Death Toll in 373 Cities Exceeds 87,300 The People’s Mojahedin...
Read more
Latest News in Brief

THE CONTENT OF THIS PAGE WILL BE UPDATED WITH THE LATEST NEWS UPDATE: 17:20 PM CEST Iran News in Brief Iran: Coronavirus Fatalities in 373 Cities Surpassed...
Read more
Search