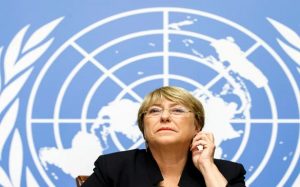 Dear High Commissioner,
We write to inform you of the continuous harassment and psychological torture by the religious fascism ruling Iran as well as its intelligence services and media against us and our families. We urge you to assign Mr. Javed Rahman or another representative on your behalf to meet us in our residence in Ashraf3 in Albania.
We were POWs in the 1980s during the Iran-Iraq war. After the war ended we decided freely and consciously to join the National Liberation Army of Iran/The People’s Mojahedin Organization of Iran (PMOI). The International Committee for the Red Cross (ICRC) used to meet us regularly. The Last Call signed on September 16, 1992, is enclosed (Attachment no 1).
After the 2003 war in Iraq, US agencies and officers carried out investigations in our camp Ashraf during 16 months until July 2004 (New York Times, July 27, 2004) and thereafter recognized our status as protected persons under the 4th Geneva Convention and signed separate, personal agreements with us (Attachments no 2 & 3).
The report by then-Colonel Phillips, the commander in charge of Ashraf’s protection at that time, wrote about his observations and investigation in Ashraf, which is registered in the US Congressional Record dated June 21, 2005 (Attachment no 4).
The last time, under pressures from Iran’s regime and its agents in Iraq, we were interviewed, in a location separated from that of the PMOI, by US officers during a period of one month in July 2005, to assure them of us having freely chosen our path.
A thank-you letter signed on June 25, 2004, by Major General Brandenburg and addressed to Ms. Parsai, Ashraf’s commander, is also attached. (Attachment no 5). Before this, the ICRC had formally written to the National Council of Resistance of Iran (NCRI) on June 10, 2005, that they no longer consider us POWs (Attachment no 6). Following this, US officers separately handed us copies of General Brandenburg’s letter to PMOI Secretary-General signed October 7, 2005, on our rights and all Ashraf’s residents’ rights
(Attachment no 7). To this should be added our regular interviews, like all other Ashraf residents, lasting until the last day of US Army forces’ presence in camp Ashraf in February 2009.

In addition, the Iraqi Human Rights Ministry performed finger-printing and interview sessions with us during two months beginning with February 26, 2009, until April 22, 2009, under the supervision of American officers and the ICRC to make sure we had freely and knowingly joined the NLA/PMOI. You can understand the amount of pressure and repression we have endured because of the meddling by the mullahs ruling Iran, including seven attacks on camps Ashraf and Liberty, and continuous rocket attacks on behalf of the Iranian regime and its mercenaries in Iraq.
We also endured continuous psychological torture by 320 loudspeakers during 22 months beginning February 2010 until December 2011, where they threatened to kill or burn us.
Even in Albania, the mullahs’ regime terrorism did not leave us alone. In one specific example, the regime plotted to bomb our New Year festivity in March 2018, which was thwarted at the last minute. Albanian Prime Minister Mr. Edi Rama made public the foiled attempt on April 19, 2018. In addition, in a press conference held on October 23, 2019, the Albanian Police chief revealed, terrorist plans by the mullahs’ Islamic Revolutionary Guards Corps (IRGC) against us through elements acting under the guise of “former PMOI members” or “PMOI defectors” hired by the mullahs’ Ministry of Intelligence and Security (MOIS).
We are confident that you are aware of the expulsion of the Iranian regime’s ambassador and its terrorist-diplomats from Albania and the closure of their front institutions and terrorist outfits as well as the arrest of the Iranian regime’s terrorist diplomat, Assadollah Assadi, who has been in custody in Belgium for the plot to bomb the gathering of the Iranian Resistance in Paris in June 2018.
The regime’s propaganda, demonization campaign, and terror plots against the PMOI as the main opposition has been remarkably stepped up following the November 2019 uprising in Iran. Last April, despite the massive spread of Covid-19 in Iran, the regime conjured up a petition by 11,000 people under the cover of the PMOI relatives in Tehran, addressed to the Albanian Prime Minister, and claimed that we had been kept in Albania against our will.
We have been recently informed through our relatives that the Ministry of Intelligence and Security (MOIS) through utilizing its agents under the guise of former POWs who were formerly with the PMOI (including Edward Tormadovian, who is in Germany, Gholamali Mirzaie, Ali Hajari, and Abdolrahman Mohammadian in Albania) is intent on initiating a new wave of psychological torture against us and exerting pressure on our families and friends in Iran by disseminating lies through BBC Persian Service. BBC Persian Service is notorious among the Iranian people because of its biased reporting in the past four decades, which explains why Iranians call it “Ayatollah BBC”.
Gholamali Mirzaie was used by BBC against us previously in November 2019. Please find the statement by 1,825 representatives and members of the Iranian communities in protest against the BBC Persian Service disseminating lies.

Yet, BBC did not report any of the denials and letters by the American and European dignitaries. (attachment 8). This is while, according to two different rulings by a German court in March 2019 and June 2020, Der Spiegel and Frankfurter Allgemeine Zeitung were ordered to remove the slanders by these agents against our movement or face six months of prison or a fine of 250,000 Euros. Both publications complied with the court orders immediately.
Dear High Commissioner,
This demonization campaign targeting our honor and dignity is not only a vivid case of psychological torture and violation of our most rudimentary rights but also sets the stage for terrorist operations against the PMOI and Ashraf3. We call upon you to condemn the Iranian regime for trampling our human rights and also ask Mr. Javaid Rehman to come and visit us. It goes without saying that we will observe all the protocols regarding Covid-19 very carefully and diligently.