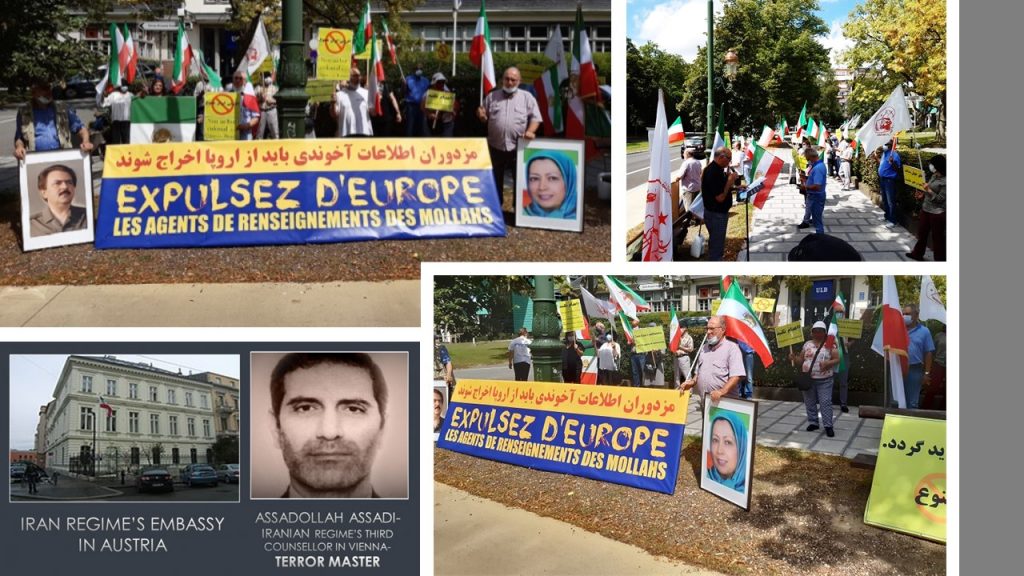 Iranians, supporters of the People’s Mojahedin Organization of Iran (PMOI/MEK) and the National Council of Resistance of Iran (NCRI), held a protest rally on August 1 in Brussels, Belgium in front of the regime’s embassy, and condemned the Iranian regime’s terrorism.

The demonstration by the MEK supporters was held a few days after the second trial of the Iranian regime’s diplomat-terrorist Assadollah Assadi. Assadi was arrested in July 1, 2018, along with his three accomplices, while attempting to bomb the NCRI’s annual “Free Iran” gathering in Paris.  Assadi and three other terrorists have been in custody since then. This is the first time a diplomat in Europe has been put on trial for direct involvement in terrorism.

Following the first nationwide Iran protests in 2018, during which the MEK played a leading role, and as the regime was grappling with international crisis, the mullahs were infuriated over the growing global standing of the NCRI and its president-elect Mrs. Maryam Rajavi. Therefore, for the first time regime had its diplomat-terrorist personally deliver the bomb in order to assassinate Mrs. Rajavi and other international supporters of the Iranian people and their Resistance.

Earlier in March 2018, the regime planned a terrorist attack against the MEK’s Nowruz celebrations in Albania, attended by Mrs. Rajavi and a group of foreign guests. This plot was also foiled and led to the expulsion of the regime’s ambassador and three other diplomats from Albania.

Due to the nature of this case, a court in Antwerp, Belgium held the second preliminary hearing on the case of Assadi on July 30, 2020, and the three-judge panel referred the case of the four jailed terrorists to the Antwerp Special Counter-Terrorism Branch. This was the end of the preliminary stages of the trial of Assadi and his accomplices. The regime had been desperately struggling to prevent a trial from taking place. The trial will begin on November 27, 2020.

Assadi is a veteran officer of the Ministry of Intelligence and Security (MOIS) and the station chief in Austria, which acts as the main base of the MOIS operations in Europe.

Previously, Mrs. Rajavi had testified for seven hours while presenting documents which made it clear that this major terrorist operation was decided during a session of the regime’s Supreme National Security Council headed by the regime’s president Hassan Rouhani and approved with the direct order of the regime’s Supreme Leader Ali Khamenei. Mrs. Rajavi highlighted that in addition to Assadi and other terrorists arrested, the actual masterminds, namely Khamenei, Rouhani, the regime’s Foreign Minister Mohammad Javad Zarif, and the Minister of Intelligence and Security, Mahmoud Alavi must be prosecuted. “This was necessary to stop the mullahs’ unbridled terrorism,” she added.

All of the privileges and resources that the regime relies on to carry out its terrorist acts in Europe must be taken away from it. The regime’s embassies must be closed. #Iranhttps://t.co/ijbGG5vcZQ