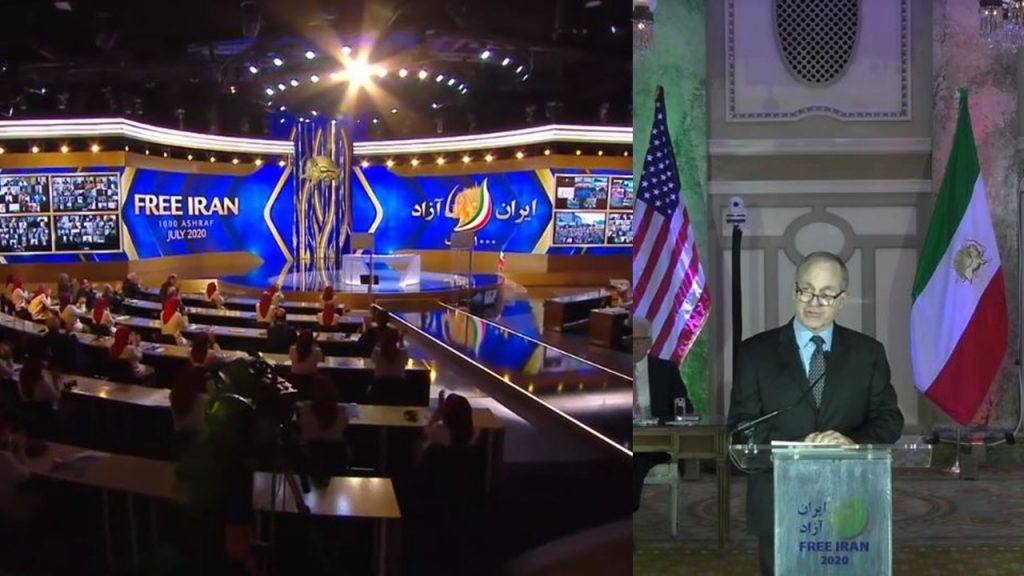 For years, the Iranian regime has been a source of instability in the Middle East and around the globe. The daily oppression of the Iranian people, depriving them of their basic rights, institutionalized corruption, and wrong economic policies are other characteristics of the mullahs’ regime.

Since the beginning, the mullahs were aware of their inability to lead Iran and manage the surging force of a liberated population from monarchic oppression, thus, they sought to divert the freed energies of a repressed society. Therefore, they started oppressing people, executing thousands, and arresting more. The regime’s founder, Ruhollah Khomeini, prolonged a devastating, unnecessary, and unpatriotic Iran-Iraq war for eight years and used it as a tool to control and oppress the restive Iranian society. The regime has never stopped its terrorist activities, such as bombing the Khobar Towers, U.S. Marines camp in Beirut, Lebanon, the recent attack on Saudi Arabia’s oil refinery and the foiled bombing plot against the National Council of Resistance of Iran’s (NCRI) annual “Free Iran” gathering in 2018 in Paris.

Massacring over 30,000 Iranian political prisoners in Iran, mostly members and supporters of the People’s Mojahedin Organization of Iran (PMOI/MEK), was also a criminal move to oppress the force of change.

If it wasn’t because of the NCRI and MEK’s revelations of the regime’s nuclear activities, there could have been a catastrophe by now. The Iranian Resistance chose to prevent an aggressive, virulently sectarian and repressive religious fascism from obtaining nuclear weapons capability, and save Iran, the region, and the world from the horrors of such a scenario.

The mullahs’ regime will not stop its domestic oppression or export of terrorism abroad. As former FBI director Louis Freeh said during the NCRI’s “Free Iran Global Summit” on July 17: “There has to be accountability. Someone has to make the decision and have the resources and the willpower to hold these criminals responsible.”

The following is the full text of Louis Freeh’s speech at “Free Iran Global Summit”:

It is a great honor to be with you here today from Washington D.C. The cry for liberty and our support for you, Madame Rajavi, and all of your colleagues, could not be stronger and could not be louder. We thank you for your leadership, your courage, and your vision, and your faith, which has inspired us very greatly. Especially pleased that we are able to address the freedom fighters in Iran who are in harm’s way every moment and who are not hiding but are in open resistance on the streets of Iran. We have enormous respect for you and your welfare and safety is our primary objective.

Regarding Iran regime’s crimes against #MEK members, former FBI Director Louise Freeh told the #FreeIran2020 conference: “There has to be accountability. Someone has to make the decision to hold these criminals to account”https://t.co/L6Zu5D23V2

You know, what is amazing about this meeting this year is not just the technology, and Madame Rajavi and your colleagues, I commend you for the ability to communicate the way we are communicating under all the challenges that you have overcome. So, wonderful job and congratulations to all the many people who have worked on it. To all our international friends and colleagues, again, we are honored to be with you here today.

One of the amazing things about this event is it is not an anniversary. We are not memorializing a past event. What we are doing is looking to the future. We are pursuing a goal and achieving new milestones every year towards a free and democratic Iran. And today, we take another step in that direction. I want to echo Governor Ridge’s comments thanking the Albanian officials who we have seen the president, the prime minister, and in Pandeli’s words, actions speak louder than words. The heroic work that the Albanian people and its leaders have done to protect the MEK are legendary. Goes back to what they did during World War II, and we thank them and honor them for the safety and the leadership and the courage that they have provided.

There is a song probably you have heard with a lyric that says, “You don’t have to be a weatherman to know which way the wind is blowing.” The wind today is getting stronger. It is moving the forces of freedom in Iran, like a dhow on the Persian Gulf, with increasing speed and momentum and support, the winds of freedom are blowing very strong at Iran. And we look at some of the positive things, again, that have been noted by many of the speakers: the Congressional resolution here in Washington just a short time ago, bipartisan, as the support for freedom in Iran has always been; the trial that started yesterday in Belgium for Assadollah Assadi who takes on the new title of diplomat-terrorist. You would have to leave it to a criminal enterprise like the regime in Tehran to actually inaugurate the role of a diplomat-terrorist. And that is only one of many active against the forces of freedom. But the fact of his trial in Belgium as we speak here today is very significant. It goes to the accountability issue which I would like to return to in a moment.

Former FBI Director Louis Freeh at #FreeIran2020 conference: “The wind is moving the forces of freedom in Iran. The regime is collapsing. The people are fed up with the oppression of the totalitarian regime.” #IranRegimeChangehttps://t.co/L6Zu5D23V2

The other event just in June, a few weeks ago, was a finding by the International Atomic Energy Administration, which is really the UN. And I quote from them, “Iran has continued to increase its stockpile of enriched uranium and remains in violation of its deal with world powers.” That is not the United States speaking, that is not the MEK speaking, that is the United Nations. No great surprise that the regime that signed that agreement could not be trusted.

I would like to close by just returning, Mrs. Rajavi, to something that you said. You talked about the crimes of this regime and its members: 120,000 people massacred, MEK members; 30,000 political prisoners killed; terrorist attacks on Ashraf 1 and 2, thousands and thousands of people wounded and killed and maimed. And you said something which I know is very close to you but also close to every one of us on this conference. There has to be accountability. Someone has to make the decision and have the resources and the willpower to hold these criminals responsible. This is a crime of such magnitude that it cannot be written off with a truth commission. It cannot be written off with a book or a footnote or a movie. These are crimes of the most serious nature. They rival by their evil and intent Nazi Germany, what happened in Bosnia, Rwanda, and many, many other places.

We should establish a world class crime against humanity documentation center. We should analyze the evidence that you have already collected. In fact, I have seen some of it in Ashraf 3. We should record the testimony of victims and eyewitnesses. There needs to be a systematic forensic examination, recording and documentation, with video and digital evidence. Like our technology here today, the people who committed all these crimes, who murdered thousands and thousands of people, they did not do it secretly. They did not even do it very cleverly. They did it with great arrogance. The arrogance that highlights evil. So, the documentation is very available. Their emails, their texts, their statements, pictures, photographs, videos. That all should be put together in a documentation center, maybe even by a third party to enhance its credibility. And at some point, as we mark more and more milestones, these people should be brought to justice like the individual now being tried in Belgium. Thank you very much, Mrs. Rajavi. Thank you for your leadership and your inspiration.

THE CONTENT OF THIS PAGE WILL BE UPDATED WITH THE LATEST NEWS UPDATE: 9:00 AM CEST Iran: Coronavirus Fatalities in 440 Cities Surpass 108,200 The People’s Mojahedin...
Read more
News