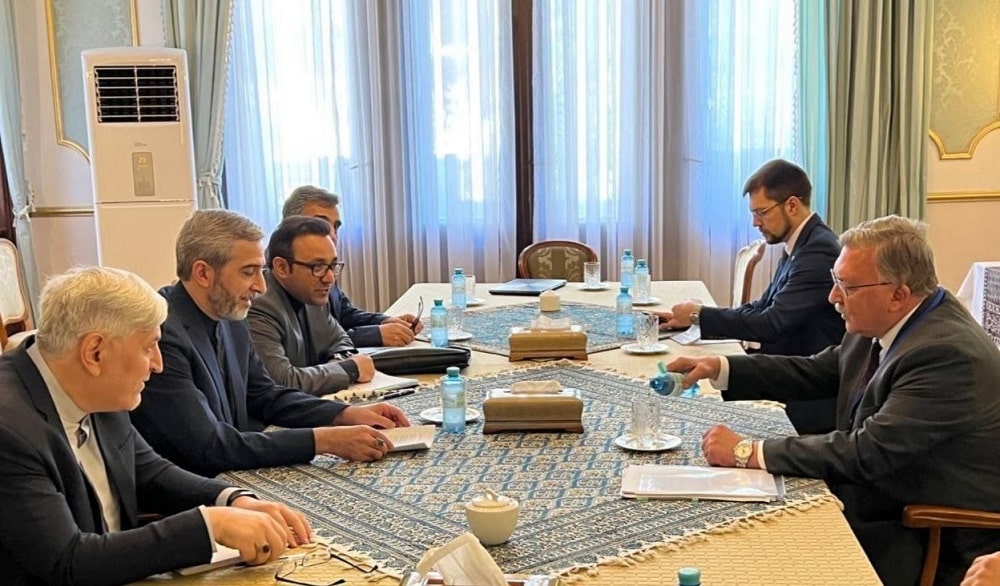 On Friday Iranian regime presented its formal response to a US proposal regarding the “final text” of the deal to restore the 2015 nuclear deal or Joint Comprehensive Plan of Action. However, regime authorities and state media outlets have remained vague on this topic, avoiding deadlines or firm commitments and explicitly stating that the negotiating process could stretch on through September.

In the meantime, 50 members of the US House of Representatives have written a letter to the US President urging his administration to exit that process and accept the collapse of the JCPOA, rather than risk implementing an agreement that excessively benefits the Iranian regime while failing to definitively halt its progress toward a nuclear weapon.

Concerns over that progress were amplified yet again on Wednesday when the International Atomic Energy Agency issues a report that confirmed an underground nuclear facility in Natanz had begun feeding uranium through the second of three “cascades” of advanced enrichment centrifuges. This move marks the latest in a long series of the Iranian regime escalations evidently intended to pressure its Western negotiating partners into conceding the final points of disagreement over the JCPOA.

Under the terms of that 2015 agreement, the Iranian regime was expected to limit its enrichment to 3.67 percent fissile purity and to avoid stockpiling more than 300 kg of the substance. Today, the regime is enriching uranium to 60 percent, putting it just a short technical step away from weapons grade, and its stockpile has grown to at least 3,800 kg, giving the regime more than enough to develop one nuclear weapon should it decide to “break out”.

New questions arose over the possible implications of these advancements on Sunday when details of the so-called final text reached the international press. It is now anticipated that the full re-implementation of the JCPOA will take place in four phases over 165 days, but it is presently unclear whether that process will involve imposing substantial restrictions on the Iranian regime’s nuclear activity before or after the regime gains access to unfrozen assets and other economic benefits.

"Amid Iran-sponsored terror plots to assassinate former U.S. officials and Iranian-American dissidents on American soil, this is no time to remove, suspend, or dilute U.S. terrorism sanctions on Iran or the IRGC," wrote 50 House members. Indeed, this is time to #ProsecuteRaisiNOW https://t.co/oDMVzqeOU0

Since negotiations to revive the JCPOA began in Vienna nearly 18 months ago, Iranian officials have been arguing that the US should remove all sanctions on the regime before they resume active compliance with the original terms. In some cases, those officials even went so far as to argue that there should be time for benefits to accrue before such compliance is expected. And perhaps most alarmingly, a key sticking point in negotiations since late last year has been Tehran’s insistence that the US remove the regime’s hardline paramilitary, the Islamic Revolutionary Guard Corps, from its list of foreign terrorist organizations, as a precondition to any deal.

In the wake of the European Union presenting its “final text” in August, US officials began voicing greater optimism about the prospects for a breakthrough while claiming that Tehran had finally dropped its ultimatum concerning the IRGC. However, the signers of Thursday’s letter to the US President – 34 Democrats and 16 Republicans – expressed skepticism on this point which aligned with reports in Iranian state media suggesting that Tehran had merely changed tack to pursue relief from targeted sanctions, rather than outright removal of the terrorist designation.

“The aforementioned reported provision creates a troubling precedent,” the US lawmakers wrote in reference to an excerpt from the newly released draft text. “We are concerned that it could significantly dilute the effectiveness of terrorism-related sanctions on the IRGC, Iran’s paramilitary terror arm, and provide the organization with a pathway for sanctions evasion.”

Although EU foreign policy chief Josep Borrell has expressed the belief that the process will be concluded in a matter of days, the Iranian regime Foreign Minister Hossein Amir-Abdollahian reinforced the notion of that process stretching on through September when he stated that there are still issues “which we need to strengthen in the text.”

Amir-Abdollahian specifically referred to Tehran’s persistent demand for the closure of an IAEA probe into the past military dimensions of the Iranian nuclear program – a probe that only remains open because regime authorities have refused to provide complete and credible explanations for the presence of nuclear material at three undeclared sites which the agency obtained samples after the JCPOA was implemented.

Regardless of whether the future of that probe is addressed directly in the pending agreement between the Iranian regime and six world powers, the fact remains that Tehran’s recurring insistence upon further changes belies the Western parties’ claim that they are not open to making any additional compromises to save the deal.