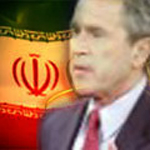 "I truly think they’re trying to wait us out. They think it’s a matter of time before people lose their nerve," Bush said after talks here with German Chancellor Angela Merkel, a key US partner in the atomic dispute.

His comments came as a defiant Iran, facing possible UN Security Council sanctions over its nuclear ambitions, refused to freeze sensitive activity that the West fears could lay the groundwork for obtaining a nuclear weapon.

Some US officials say that Tehran is counting on Moscow and Beijing — which have been skeptical of Washington’s charge that Iran seeks nuclear weapons — to resist efforts to impose sanctions on the Islamic republic.

"The Iranians must understand that they can’t wait us out and can’t hope to split a coalition — and so the first step is to go to the United Nations and speak with as common a voice as possible," said Bush.

The US president said that Iran still had a chance to come to the table after failing to give a firm answer on a package of incentives meant to ensure that it does not get nuclear weapons.

"We said, ‘reasonable period of time,’ ‘weeks, not months.’ That’s what we explained to the Iranians. They evidently didn’t believe us. And so now we’re going to go to the Security Council, and we’re united in doing that," Bush said.