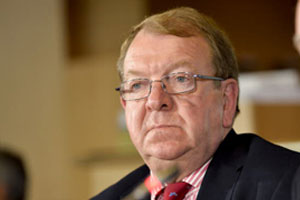 Determined to achieve a legacy agreement with Iran to put a shine on his lackluster presidency, Barack Obama signed up to a deal that far from making the world a safer place, will potentially light the fuse of the Middle East tinderbox, Struan Stevenson, a former Scottish Member of the European Parliament, wrote on Wednesday.

“The deal will release over $150 billion in assets that were frozen under the sanctions, re-vitalizing the broken Iranian economy and enabling the theocratic regime to re-double its funding of Hezbollah in Lebanon, Hamas in Gaza, the Houthi rebels in Yemen, Bashar al-Assad in Syria and the brutal Shi’ia militias in Iraq. Page after page of the so-called Joint Comprehensive Plan for Action (JCPOA) relates specifically to the dismantling of all sanctions on Iran’s banking, insurance, metals, aviation, shipping, arms and general trade markets, even covering the re-opening of Iran’s right to sell carpets and caviar to the West. Ludicrously, the West must also now end its ‘exclusion of Iranian citizens from higher education coursework related to careers in nuclear science, nuclear engineering or the energy sector.’ In other words Western universities will now train Iranians in advanced nuclear technology to ensure that they are properly equipped to build a nuclear bomb,” Mr. Stevenson wrote in the United Press International.

“More ominously, the JCPOA commits the E3/EU+3 nations to supporting Iran’s crumbling economy financially with export credit guarantees, grants, financial assistance and even loans to the Government of Iran. All ‘persons, entities and bodies’ previously banned from travelling to the West will have their full rights restored and must in future be issued with visas. The list of these persons, entities and bodies runs to more than a dozen pages and hidden away near the foot of this long catalogue of Iranian banks, petro-chemical companies, sanction-evaders and individuals is none other than General Ghasem Soleymani, the notorious commander of the terrorist Iranian Revolutionary Guards Corps (IRGC). Soleymani has a long history of supporting terrorism and has the blood of many Americans and Europeans on his hands, but under the terms of the JCPOA he will now be able to travel at will to Europe and America.”

“As far as scrutiny of Iran’s nuclear programme is concerned, regular inspections by the International Atomic Energy Agency (IAEA) appear to be limited to the Natanz site in Isfahan Province, Iran’s main underground nuclear facility with over 19,000 operational centrifuges. Natanz itself was first revealed to Western intelligence agencies by the People’s Mojahedin Organisation of Iran (PMOI), an exiled key opposition group, in 2002; until that point it had been a closely guarded secret by the Iranian regime. In February this year the PMOI revealed another secret site called Lavizan-3 in a military base in northeast Tehran’s suburbs. Again this had been entirely hidden from Western inspectors.”

“However the JCPOA agreements states that: ‘Iran will permit the IAEA regular access, including daily access as requested by the IAEA, to relevant buildings at Natanz.’ The fact that only ‘relevant’ buildings will be accessed and only at Natanz is perhaps indicative of how Iran intends to restrict inspections to the bare minimum. The West is reassured by a clause that states: ‘For 15 years, the Natanz enrichment site will be the sole location for all of Iran’s uranium enrichment related activities including safeguarded R&D.’ So that’s alright then, we can trust the Iranian regime who previously hid all their nuclear facilities from the West, to centralize their nuclear enrichment processes at one site which will be open for regular inspection! How on earth John Kerry and the E3/EU+3 team fell for this is astonishing!”

“The ink was hardly dry on the agreement before Iran’s Supreme Leader Ayatollah Ali Khamenei, in a fiery address to mark the end of Ramadan in a mosque in Tehran said: ‘Whether this scheme is approved or disapproved, we will never stop supporting our friends in the region and the people of Palestine, Yemen, Syria, Iraq, Bahrain and Lebanon. Even after this deal our policy towards the arrogant US will not change. Our policy in the region is 180 degrees different from the US,’ he told an audience of hardliners who cried: ‘Death to America’ and ‘Death to Israel’.”

“So Iran’s Supreme Leader has already breached a key clause in the pact. Let this be a salutary warning to all the E3/EU+3 legislators who must now give their seal of approval to the agreement. The fascist and oppressive theocratic regime in Iran cannot be trusted. This pact should be rejected. The only way to make the world a safer place is to topple the corrupt mullahs and restore freedom and democracy to the beleaguered people of Iran,” Mr. Stevenson added.