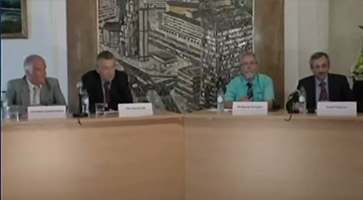 NCRI – German lawmakers and human rights defenders this week condemned the rapid deterioration in the human rights situation in Iran under Hassan Rouhani and called on European countries to condition their relationship with the Iranian regime on an end to executions in Iran.

On Tuesday, August 4, an online conference, entitled “Nuclear agreement with Iran: Effects on human right in Iran and for Iranian dissident in Camp Liberty”, was held at the Office of the National Council of Resistance of Iran (NCRI) in Berlin.

Mr. Christian Zimmermann stated: While the process to sign the nuclear accord between the P5+1 and Iran is not finished and no agreement is signed, the question here is whether such an agreement would lead to a more liberal Iranian regime or not. I think the answer is no. During Rouhani’s tenure who demagogically calls himself a moderate, the number of executions is far higher than during his predecessor Mahmoud Ahmadinejad. The nuclear deal has not generated any change in the nature of this regime. An irrefutable reason is that thousands of people are being killed in the region and neighboring countries because of the policies of Iran. Imagining moderation in Iran is a false supposition. There has been no change in Iran or in Iran’s policies, and the nuclear deal has not generated any change in the Iranian regime’s foreign policy. The militias affiliated with Iran have remained as subversive as ever. The Iranian regime continues its expansionist march. In its principles, this regime has much in common with the terrorist ISIS group, and the Vienna accord promises no change in the future.

Mr. Zimmermann added: Any fundamental change in Iran requires a regime change. There is no rule of law in Iran. We have a totalitarian regime in power and people’s aspirations have not and will not be met. The majority of the Iranian people want change and this change is within reach. For this purpose, one must enter into dialogue with the Iranian Resistance since they have a clear view of how this change may come about. We must enter into dialogue with them in Europe, in the United States and at the United Nations. We need this Resistance since they know this regime from within. This regime has been a violator of human rights for decades, but human rights is a basic principle that needs to be part of any political or trade relations with the Iranian regime. If the Iranian regime refuses to accept this basic principle, we should not deal with it at all.

Mr. Otto Bernhard, who is also a former member of Germany’s federal Bungestag, said: The fundamental question is whether the world is really safer with this nuclear deal that is to be signed? Apparently, it seems that the Iranian regime has been contained in its attempt to acquire the nuclear bomb, but a closer look shows that this deal has not made the world any safer. The totalitarian regime of the mullahs is a force that advances fundamentalism globally. The truth is that we cannot enter into a deal with the mullahs and we need to keep our distance from them. The Iranian regime will be able to continue with its nuclear bomb project at a later date. We need to continue our struggle to reach our goal which is a free Iran. We need to work for human rights in Iran. We need to support Iran’s legitimate opposition.

Mr. Martin Patzelt, a Member of the Bundestag, noted: I too ask this question; can we really tap on each other’s shoulders and say that we have reached such an achievement through this nuclear deal and we have saved global peace? As someone who has been in East Germany I can tell you from personal experience that I am familiar with the forms and mechanisms of a dictatorship although its dimensions were quite different from what is happening in Iran. My experience tells me that we should move with open eyes regarding a dictatorship. We cannot turn a blind eye toward it. Human rights are part and parcel of the development of a society. We would be naive if we just pursue economic gains.

Mr. Patzelt added: It is only natural to fear that such a regime would acquire the nuclear bomb and this fear was the driving force behind the imposition of economic sanctions against the Iranian regime in our attempt to contain it. However, this deal has not secured peace in that region or in the world. We have a responsibility for what is happening in Iran. A regime that severely violates human rights and is incapable of ensuring the minimum human rights for its people cannot be our natural ally. We are looking for allies; we are looking to prevent catastrophes. Our current policy dictates this. We need to be vociferous in our protest and warnings. We need to use the instruments in our economy to tell the other side that what you are doing is in no way acceptable to us. I do not want to live in Germany with the money and trade that is earned at the expense of other people’s blood.

Mr. Wolfgang Holzapfel, Chairman of “17 June 1953 uprising against Berlin Wall” human rights association, said that we have a responsibility to support those who courageously stage a resistance in their country and work for human rights and oppose tyranny. We cannot discourage them by leaving them alone.

Mr. Dabiran noted: In its consecutive retreats in the nuclear negotiations, the Iranian regime has effectively surrendered and gave in to capitulation. These retreats have intensified internal conflict within the power circle and have thus weakened the regime in its entirety. Now, a weakened regime is confronting an increasing domestic opposition by staging a wave of executions. Every six hours one person is executed in Iran. Our urgent demand is for the executions to cease and we call on the German government and the European Union to break their silence and condemn the executions in Iran.

In his answer to one of the reporters Mr. Dabiran said: What really brought the Iranian regime to the negotiating table was its fear of a popular uprising beside the effects of the economic sanctions. A popular uprising is the principal red line of the clerical regime. Members of the People’s Mojahedin Organization of Iran (PMOI/MEK) in Camp Liberty have the potential to strongly influence the Iranian society to rise up against the mullahs’ regime because they are paying a very dear price and are working with all their capacity to promote regime change in Iran. The vengeful enmity of the mullahs with PMOI (MEK) members is exactly aimed at confronting this call for regime change.