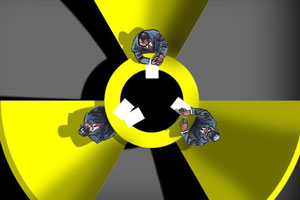 The United Nations nuclear watchdog announced on Sunday that the clerical regime in Iran is prepared and will start to “produce low-enriched uranium,” which will be “up to 20 percent at the Fordo Fuel Enrichment Plant.” This is part of the regime’s blackmailing campaign. The world community should act now against such blackmail.

The regime has been violating its commitments under the terms of its 2015 nuclear deal with world powers, formally known as the Joint Comprehensive Plan of Action (JCPOA). Meanwhile, the European signatories of the deal refuse to act and the EU “remains fully committed to the complete and effective implementation of the Joint Comprehensive Plan of Action (JCPOA) by all sides,” according to the Iran Task Force of the EU’s External Action Service (EEAS).

This weak reaction by the EU has encouraged the regime to continue its malign activities and breaches of the nuclear deal. The JCPOA is full of flaws and fails to address the regime’s destabilizing regional activities, and the regime has been able to use the deal’s loopholes to secretly continue its nuclear activities.

The regime has never been loyal to its commitments under the terms of the JCPOA.

Mr. Alireza Jafarzadeh, NCRI-US office deputy director, during this conference, revealed: “According to top-secret intelligence obtained by the network inside Iran of the People’s Mojahedin Organization of Iran, (PMOI/MEK) from within the regime, SPND has continued its work following the JCPOA. The structure and the personnel of SPND remain intact and part of the institution has been expanded. Thus, the JCOPA notwithstanding, the Ministry of Defense and the IRGC have maintained their capabilities to build a nuclear weapon.”

In April 2017, the NCRI-US Office revealed the continuation of such activities in a center known as Research Academy in the Parchin complex southeast of Tehran.

The Iranian regime has been using a blackmail campaign to achieve its goals in different areas. The international community’s inaction has effectively assisted the mullahs’ blackmail strategy.

When in 2018 the United States withdrew from the JCPOA, citing the regime’s non-compliance with the deal and its continued malign activities, the regime used the EU’s appeasement policy to initiate its nuclear extortion campaign.

Iran’s blackmail campaign goes back to the 1980s, when the regime stormed the U.S. embassy in Tehran and took numerous hostages. The regime continued using hostage taking and terrorism to intimidate the West and achieve its goals.

In this regard, the regime has been taking many dual nationals hostage, putting pressure on western governments to succumb to its demands.

November 27 and December 3 marked the historic trial of Iran’s diplomat-terrorist Assadollah Assadi, who had attempted with his accomplices to bomb the NCRI’s “Free Iran” gathering in Paris in 2018.

While Assadi and his accomplices were caught red-handed, and undeniable evidence indicates they will be condemned on charges of terrorism, the regime resorted to its blackmail campaign.

Simultaneous with Assadi’s trial in Belgium, Tehran announced it will hang Ahmadreza Djalali, an Iranian academic and Swedish national, who used to teach in a university in Belgium. This action failed, because the Foreign Affairs Committee of the Belgian Parliament quickly reacted, adopting a resolution that if the regime executes Djalali, they will completely cut all relations with the regime.

The regime had to stop Djalali’s execution.

In addition, Assadi had previously threatened the Belgian authorities in March. According to Reuters: “‘According to ASSADI Assadolah we (Belgium) do not realize what is going to happen, in the event of an unfavourable verdict’ the minutes, taken by the Belgian police, say.”

“Assadi told police that armed groups in Iraq, Lebanon, Yemen and Syria, as well as in Iran, were interested in the outcome of his case and would be watching from the sidelines to see if Belgium would support them or not,” Reuters added.

To this end, Mrs. Maryam Rajavi, the NCRI’s president-elect, on June 19 said that the mullahs’ regime “has never give up the project to acquire an atomic bomb and continues the deception and concealment. The regime uses all the facilities and concessions that the nuclear deal has given it to pursue terrorism, foreign warfare and domestic repression.”

Now, amid the increasing protests inside Iran, particularly after the major Iran protests in November 2019, and regarding the new change in the balance of regional forces against the regime and its repercussions for the mullahs’ survival, the regime needs an atomic bomb more than ever.

Thus, instead of trying to revive the JCPOA’s corpse and succumbing to Iran’s nuclear extortion, the EU should act immediately to hold Tehran accountable for its breaches.

The UN Security Council should re-impose all its six resolutions and bring a complete halt to the regime’s nuclear activities. The IAEA inspections are indispensable to preventing the regime from acquiring a nuclear bomb.