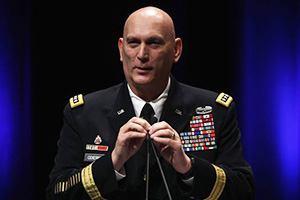 The U.S. Army’s top officer told Fox News he supports the recently announced nuclear deal with Iran but he warned that Iran will not change its behavior in the region.

Army Chief of Staff Gen. Ray Odierno who spent more time in Iraq than any other U.S. Army general said “Iran has continued to do malign activities throughout the Middle East [and] they will continue.”

Gen. Ray Odierno blamed the Iranian regime for contributing to the unraveling of Iraq and the rise of ISIS.

In an exclusive interview with Fox News on Tuesday, the general pointed words on the rise of ISIS in Iraq and Syria – suggesting it didn’t have to be this way.

it’s “frustrating” to watch the gains he helped achieve in Iraq disintegrate at the hands of the Islamic State, saying in an exit interview that the chaos now unfolding “might have been prevented” had the U.S. stayed more engaged.

Odierno said the fall of large parts of Iraq was not inevitable, reiterating concerns about the pace of the U.S. troop withdrawal there.