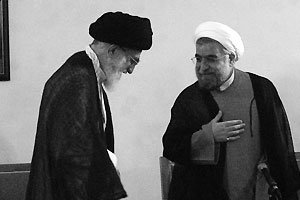 The Iranian regime will not step back from pursuing nuclear program, nor will it give into discrimination in this regard, Hassan Rouhani said Sunday.

Speaking at a ceremony to unveil three new nuclear projects he denied any ‘secret nuclear activities’ by the regime as ‘lie’ that is being spread by the West.

However, he said when it was revealed that we had centrifuges running ‘we asked them, were we supposed to inform you of building the centrifuges?’

“They told us that you have been doing secret nuclear activities for the past 20 years. We ask them based on which law we should have informed you about these activities.”

Hassan Rouhani referred to the nuclear crisis as ‘propaganda’ in which ‘the West could accompany others and create a problem for us.’

Meanwhile, the Iranian regime’s Supreme Leader Ali Khamenei said on Sunday that Western expectations for the Islamic Republic to limit its missile program were ‘stupid and idiotic’.

“They expect us to limit our missile program while they constantly threaten Iran with military action. So this is a stupid, idiotic expectation,” Khamenei was quoted as telling the IRNA news agency.

“The revolutionary guards should definitely carry out their program and not be satisfied with the present level. They should mass produce. This is a main duty of all military officials,” Khamenei said.