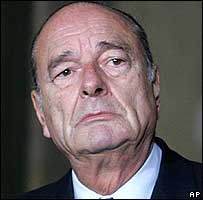 The New York Times, August 30 – In a stark ultimatum, President Jacques Chirac of France warned Iran on Monday that it would face censure by the United Nations Security Council if it did not reinstate a freeze on sensitive nuclear activities under an agreement reached last November.

In his annual speech to France’ s ambassadors at Élysée Palace, Chirac made clear that he was losing his patience with Iran, even as he urged its leaders to accept an offer of incentives by France, Britain and Germany in exchange for an indefinite freeze of its uranium conversion and enrichment activities.

" Today I call on the Iranian authorities to choose the path of cooperation and confidence by carefully examining this offer and resuming their commitment to suspend activities related to the production of fissile materials," Chirac said. He added: " There is room for dialogue and negotiation. We call on Iran’ s spirit of responsibility to restore cooperation and confidence, failing which the Security Council will have no choice but to take up the issue."

France’ s foreign minister, Philippe Douste- Blazy, has also given Iran sharp warnings, but this is the first time that Chirac has clearly stated that Iran would face possible censure or even sanctions in the Security Council if it does not reinstate its freeze.

In taking such a tough line, Chirac sends a clear signal to Iran’ s newly elected conservative president and new nuclear negotiating team that France has moved closer to the position of the United States, which has long held that Iran’ s case belonged in the Security Council.

The Iran case has become more urgent following Iran’ s resumption of uranium conversion at its plant in Isfahan earlier this month and the breakdown of its talks with the three European countries, under the auspices of the European Union.

Iran also rejected the European offer for a range of economic, political, security and technological incentives in exchange for permanently freezing its programs to produce enriched uranium, which can be used for either peaceful nuclear energy or in weapons programs.

Iran has declared – correctly – that its nuclear activities are allowed under the Nuclear Nonproliferation Treaty, but Chirac has long made clear in conversations with world leaders, including President George W. Bush, that he believes Iran is intent on developing nuclear weapons.

" The use of civilian nuclear energy, which is perfectly legitimate, must not serve as a pretext for pursing activities that could actually be aimed at building up a military nuclear arsenal," Chirac said.