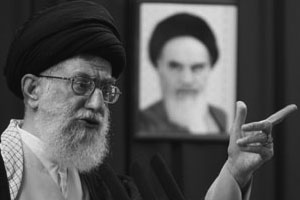 The Iranian regime’s supreme leader called for a continued struggle against the U.S. Saturday even as the regime’s officials continued nuclear talks with the US and other world powers in Vienna.

The negotiations entered their 16th day Sunday with no indications of a major breakthrough after three more extensions and four targets for a deal, and diplomats said it remained unclear whether an agreement could be reached by Monday, the latest deadline.

Iran’s state-run Press TV cited Ali Khamenei as calling the U.S. an “excellent example of arrogance.” It said Khamenei told a gathering in Tehran to be “prepared to continue the struggle against arrogant powers.”

Khamenei’s comments have appeared to be a blow to U.S. hopes that an agreement will lead to improved relations with the country and possible cooperation against Islamic rebels.

“We behaved so skillfully that if talks won’t succeed, the world would accept that Iran is for logic and dialogue and never left the negotiating table … and if we succeed by the grace of God, the world will know that the Iranian nation can resolve its problems through logic,” his website quoted him as saying.

The supreme leader’s comments also come after it was learned Saturday that the Islamic Republic’s spies have been seeking atomic and missile technology in neighboring Germany as recently as last month.

The Iranian regime’s illegal activities have continued since talks between Tehran and the P5+1 – the five permanent members of the UN Security Council as well as rotating member Germany – began with a Joint Plan of Action in 2013, according to German intelligence sources. The JPOA was intended to stop Tehran’s work on a nuclear weapon until a comprehensive agreement is reached.

“You would think that with the negotiations, [Iranian] activities would drop,” a German intelligence source said, according to Fox News. “Despite the talks to end Iran’s program, Iran did not make an about-turn.”

With a final agreement to restrict Tehran’s nuclear program set for Monday, the intelligence data from Germany raises disturbing questions about the success of the deal.

Tehran has sought industry computers, high-speed cameras, cable fiber, and pumps for its nuclear and missile program over the last two years, according to German intelligence sources. Germany is required to report the Iranian regime’s illegal procurement activities to the UN.

Any deal is meant to clamp long-term and verifiable restrictions on Iranian nuclear programs that are technically adaptable to make weapons in exchange for sanctions relief for Tehran.

The scope of access to U.N. inspectors monitoring Tehran’s nuclear program remains a sticking point. Another unresolved matter is the regime’s demand for a U.N. arms embargo to be lifted as part of sanctions relief.

The current round was supposed to conclude on June 30, but was extended until July 7, then July 10 and now July 13. The sides had hoped to seal a deal before the end of Thursday in Washington to avoid delays in implementing their promises.

By missing that target, the U.S. and Iran now have to wait for a 60-day congressional review period during which President Barack Obama can’t waive sanctions on the Iranian regime. Had they reached a deal by Thursday, the review would have been only 30 days.