Assassination of Kazem Rajavi- Assassins had come from Iran 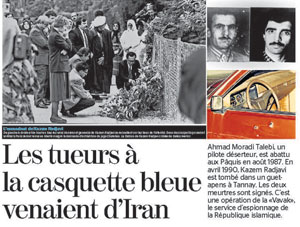 By Olivier Bot, Published in Tribune De Geneve, 11 July 2015 (Translated to English by NCR-Iran.org
A young couple, around 30 to 40, are strolling at night by the lake. The weather is nice and breezy. It is August 10, 1987. Hand in hand they are reaching their hotel of Edelweiss at Navigation Square. Suddenly, two men appear. One of them draws a German Walther PPK handgun with a silencer. Six shots are fired from close range. The man falls to the ground in front of his pregnant wife.

Philippe-Plantamour Street. The assassins run away leaving a blue helmet with face shield at the site of the assassination. The victim is Colonel Ahmad Moradi Talebi, an Iranian Air Force pilot who ran away during the Iran-Iraq war with his jetfighter.

Ahmad Mordi had been threatened and he had informed the Geneva Police of the threats. In the beginning of the year, another runaway pilot like him had been murdered in Hamburg. A wave of bloody assassinations began in Europe ever since mullahs assumed power in Tehran.

During the busy days of the 1979 revolution, some who were involved in the revolution were brushed aside only to be targets to be destroyed by the clerics later on. This included the People’s Mojahedin Organization of Iran (PMOI/MEK) led by Mr. Massoud Rajavi.

After a few years in France, Massoud’s brother Kazem Rajavi moved to Geneva. He taught at University of Geneva Law School. It was in 1971 that he established the Swiss Society for Defense of Iranian Political Prisoners with the help of a resident of Geneva by the name of Christian Grobet who later became head of government advisors during the years 1986 to 1993. Kazem’s younger brother Massoud Rajavi had been condemned to death on political charges by the Shah. Kazem succeeded in commuting the sentence to life in prison.

Then came the revolution in Iran and Massoud is set free. Kazem quickly catches a plane to Tehran. He would be the first Iranian Ambassador to the United Nations in Geneva and then Iran’s Ambassador to Africa.

However, as mullahs increasingly strengthen their grip on power, Kazem quits with quite a tumult and returns to Geneva to request asylum for a second time. He joins the National Council of Resistance of Iran (NCRI) that has been established by his brother and he would represent NCRI at the United Nations in Geneva.

His resolve in the struggle against a new government that easily tramples upon human rights leads to the appointment of a UN Special Rapporteur for Iran and the first resolution on Iran at the UN Commission on Human Rights in Geneva.

Just like Ahmad Moradi Talebi, Kazem Rajavi had been threatened. In the hall of UN Headquarters, a diplomat of the newly established Islamic Republic shouts at him: “We will kill you!”

In 1986, Ayatollah Khomeini, the Supreme Leader of the revolution, issues a fatwa for Kazem Rajavi to be killed. Khomeini is the same man who three years later would target Salman Rushdie, the author of “Satanic Verses”, with another fatwa.

VAVAK, the new intelligence service in the Islamic Republic that replaced Shah’s infamous SAVAK would be tasked to carry out Kazem’s assassination. Preparations are meticulously made. According to Dr. Sanabarq Zahedi, a lawyer that has worked on all of the assassinations ordered by the Iranian regime, three scenarios had been scrupulously worked on: Blowing up Kazem’s home with the people inside, trapping the vehicle of the “traitor”, and ambushing Kazem’s vehicle. Ultimately, the last option is chosen. Preparations are made in Qazvin, a city in western Iran where the scene of the murder is practiced.
The assassins even did not wait for rain to fall in order to replicate the rainy weather of Switzerland. Reconnaissance is made in Switzerland from October 1989 until the end of January 1990. The operation is to be carried out in mid April.

On April 24, after going to the bank and a cigarette shop, Kazem Rajavi drove his red Datsun on Coppet Road. He was going to his home in Tannay and was little aware of the fact that he was being followed by two vehicles. One of the two vehicles was captured on camera as it was speeding. This car passes Kazem and cuts off his way. The second vehicle gets beside Kazem’s vehicle and a man armed with an Israeli Uzi machinegun opens fire on the driver of the red car instantly killing the driver. Six bullets hit Kazem; five critically. The commando leaves his blue helmet beside the body as assassin’s signature.

The police of Vaudoise and the examining magistrate of Vaud Province Roland Chatelain spend little time finding the assassins. We should say that the commandos who carried out the operation did not go into much trouble to erase the evidence. An international warrant is issued for thirteen people involved in the assassination. They all had official passports of the Iranian services stamped “on mission” and most of them had the same street address in Tehran that is related to the foreign ministry and a VAVAK safe house. Most had entered Switzerland with a direct Tehran-Geneva flight. The serial numbers of their tickets are one after the other. Two hours after the ambush, many of the suspects flew to Vienna. There, their lead is lost as they board a plane to Tehran using aliases.

One day after this sad incident, Kazem’s brother Massoud Rajavi sends a telegram to Arnold Koller, head of the Confederation, where he discloses the names of two high-ranking Iranian diplomats involved in supervising the operation.

One of the cars used by the assassins is found near the airport, but where is the second car? They are the Americans intelligence services with their powerful eavesdropping stations in Geneva who direct their Swiss colleagues. The second car is found inside the Iranian section at the United Nations in Conches. Cooperation between the two intelligence services removes all doubt. Two of the Iranians involved in this crime are arrested in Paris on November 15, 1992. They had raised suspicions and were in fact preparing another operation in Germany. Judge Chatelain requests their extradition from France. Unfortunately, Paris frees the two on grounds of “national interest”.

In 2006, examining magistrate Jacque Antenen from city of Vaudois who has resumed investigation into this file once again issues international arrest warrants. This time in the arrest warrant he targets a senior official of the Islamic Republic of Iran, Ali Fallahian who was Minister of Intelligence of President Hashemi Rafsanjani at the time.
In March 2013, a shadowy figure in the murder of Kazem Rajavi surfaces in Geneva. He is Akhoundzadeh Basti, deputy foreign minister who heads the Iranian delegation to the Human Rights Council at the United Nations. He was on the same plane as the assassins. This diplomat had raised the suspicion of the security services. Much like Hadi Najafabadi who was Iranian Ambassador to Abu Dhabi, he too was supervising the assassination. He was not arrested because of diplomatic immunity.
Tehran killed over 250 of Islamic regime’s opposition during the years 1984-1994.

A few relevant dates are:

– November 1979: Ayatollah Khomeini who came to Tehran in February to assume power calls himself Supreme Leader

– June 20, 1981: People’s Mojahedin Organization of Iran (PMOI/MEK) who took part in toppling the monarchy is declared outlawed by the Iranian regime

– November 15, 1992: Two suspects of Kazem Rajavi’s assassination are arrested in Paris by the international arrest warrant issued by examining magistrate Roland Chatelain, but they are freed

Photo: Assassination of Kazem Rajavi
From left to right, top to bottom: Kazem’s Iranian and Swiss friends gather at the site of his assassination. Two suspects arrested in Paris are freed despite request of extradition by examining magistrate Roland Chatelain. Kazem’s vehicle riddled with bullets.

Ahmad Moradi Talebi, a runaway pilot is assassinated in auz Pâquis in August 1987. In April 1990, Kazem Rajavi is ambushed in Tannay. Both assassinations have links to VAVAK, the Islamic Republic Intelligence Service. 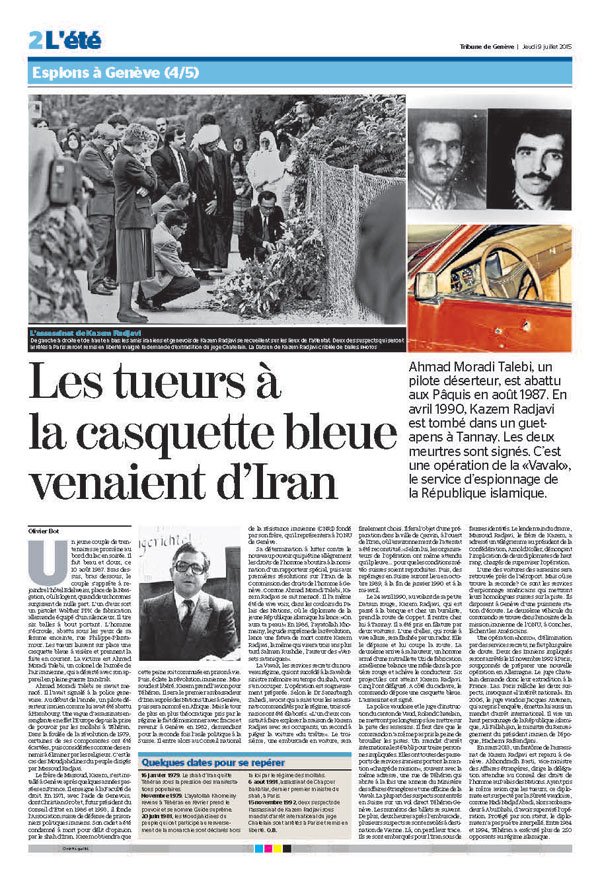