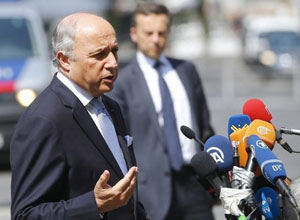 France’s Foreign Minister Laurent Fabius appeared to put pressure on the Iranian regime on Saturday to speed up in making a decision in the international nuclear talks, saying all issues were now on the table.

The Iranian regime and the six powers involved in the talks – Britain, China, France, Germany, Russia and the United States – have given themselves until Monday to reach a deal to bring sanctions relief for Tehran in exchange for curbs on its atomic program, their third extension in two weeks.

“Now that everything is on the table, the moment has come to decide,” French Foreign Minister Laurent Fabius said in a statement sent to Reuters after speaking to U.S. Secretary of State John Kerry, British Foreign Secretary Philip Hammond, and the Iranian regime’s Foreign Minister Mohammad Javad Zarif.

Among the biggest sticking points this week has been the Iranian regime’s insistence that a United Nations Security Council arms embargo and ban on its ballistic missile program dating from 2006 be lifted immediately if an agreement is reached.

Fabius and Hammond returned to Vienna on Saturday and a U.S. official said that Kerry had spoken by telephone with Russian Foreign Minister Sergei Lavrov, who was not in Vienna.

In the last few days the talks have become bogged down, with diplomats speaking of a shouting match between Kerry and Zarif.

The White House said on Friday that the United States and its partners “have never been closer” to agreement with Tehran but that the U.S. delegation would not wait indefinitely.