Bloomberg, August 18 – Iran has continued to produce centrifuges, which are used in the uranium enrichment process, in contravention of a November 2004 agreement with the U.K., France and Germany to suspend all such activities, the exiled opposition National Council for Resistance in Iran said. 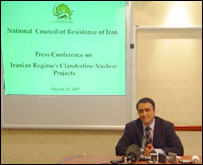 Bloomberg, August 18 – Iran has continued to produce centrifuges, which are used in the uranium enrichment process, in contravention of a November 2004 agreement with the U.K., France and Germany to suspend all such activities, the exiled opposition National Council for Resistance in Iran said.

Iran this month removed United Nations seals on equipment used in uranium enrichment at its Isfahan plant, after rejecting an offer from the so-called EU-3 of technology and economic incentives in exchange for halting processing activity. Even during the supposed suspension, Iran had continued to make centrifuges, the NCRI said at a London press conference today.

“In several secret locations, including several sites around Tehran, the regime is working round-the-clock to build centrifuges,” Hossein Abedini, a member of the NCRI’s Foreign Affairs Committee, told reporters. “Thousands of these machines have already been built and are ready for use,” in work that has been “non-stop throughout the past few months.”

The U.S. accuses Iran of pursuing a nuclear weapons program. Adam Ereli, deputy State Department spokesman, said last week in Washington that a referral of Iran to the UN Security Council for sanctions is the “next step.” Iran has repeatedly said its nuclear program is for peaceful purposes. Nobody answered calls made to Iran’s Foreign Ministry today.

The NCRI has in the past revealed information about Iran’s nuclear activities that has proven to be true. The group in August 2002 said that Iran was building secret nuclear facilities in Natanz and Arak. Iran admitted the existence of those facilities during a visit to the Islamic Republic in February 2003 by officials from the UN’s International Atomic Energy
Agency.

Iran’s regime has also set up a “massive network of front companies” to conceal nuclear-related activities, Abedini said. He named some of the companies and said some were located in Isfahan and Tehran. He named five officials he said are involved in the production of centrifuges. All the information, obtained from people working within different government departments, has been passed to the IAEA, he said.

“We are assessing this just as we do all information,” IAEA spokesman Mark Gwozdecky said in an interview from Vienna, where the agency is based. “We will follow up on all credible leads.”

The agency is monitoring Iran’s Isfahan plant, where work
resumed this month on the first steps in converting uranium. The
process leads to enriched uranium, which may be used in power
plants or nuclear weapons.

Iran’s religious regime, led by Ayatollah Ali Khamenei, is “bent on” acquiring nuclear weapons, and continues to produce plutonium in Arak, as well as working on projects to build nuclear warheads, casings and a neutron initiator, Abedini said.

Centrifuges spin at supersonic speeds and can enrich uranium hexafluoride gas, which can be used in atomic weapons. Under the
terms of its EU deal, Iran said it will stop making and importing gas centrifuges.

The National Council of the Resistance was founded in July 1981 to oppose the Islamic Republic in Iran. It includes groups such as the People’s Mujahedeen, the Organization of Iranian People’s Fadaian Guerrillas and the Committed Professors of Iran’s Universities and Schools of Higher Education. Its headquarters are at Auvers-sur-Oise, north of Paris.