Extension of talks a dirty game by Iran to buy time 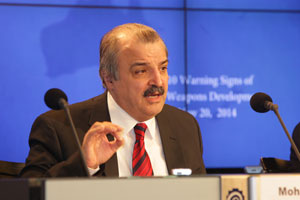 As the deadline for Iran talks is looming, Mr. Mohammad Mohaddessin, Chairman of the NCRI’s Foreign Affairs Committee, in a short interview with ncr-iran.org, described the regime’s new tactics in trying to extend the negotiations without taking any serious steps to dismantle its nuclear weaponry program.

Due to the importance of this interview please find below a text of the complete Q&A.

Q. What does your information say about the framework that the Iranian regime’s supreme leader has set for the regime’s negotiators? Where and what is his redline?

A. The nuclear weapon is a necessary component of the mullahs’ strategy for survival and they will not let go, unless they will be forced to. Our information shows that the key decision-maker in the nuclear talks in Iran is Khamenei. He has clearly set redlines for the negotiators in a way that their pathway to bomb would not be blocked. Therefore, the regime’s negotiators are considering one of the following roadmaps in this last round of negotiations:

Plan A is to reach a final agreement while the pathway to bomb would still be open.

Plan B, or the bottom end, will be to try to prolong the negotiations further to buy more time.

Q. What are the regime’s tactics to achieve these and what are the possible options?

What is obvious, even from their public positions on the statewide media and newspapers, is that they are after extending the negotiations under the pretext of reaching a new general “framework” without getting into too many details, to leave room for further negotiations. This is indeed nothing but the extension of the same trend of negotiations. A very dangerous path that will ultimately let the mullahs’ regime, the worst state sponsor of terrorism, to obtain nuclear weapons.

This is indeed an indication of the fact that the process that P5+1 has taken so far has failed and has not been successful in preventing Iran’s dictatorial regime’s nuclear weaponry program.

Q. Can you elaborate further on this last point please? Why do you consider the negotiations a failure?

Well, after a year of negotiations, there still seems to be no political intentions from the side of the mullahs in Iran to put aside their nuclear ambitions. This is while the nuclear negotiations have been a top priority for the west, and particularly the United States and its secretary of state who during the ten rounds of negotiations, has spent at least 30 working days with his team on this issue, yet, still there are no serious signs that the mullahs are willing to finally step away from their nuclear weaponry program.

On Thursday, 20th of November, in a news conference in Belgium, which was organized by the international committee In Search of Justice (ISJ), a very valuable study, “Examining 10 warning signs of Iran Nuclear Weapons Development” was publicized, in which it was clearly shown and documented how the weaponry program is embedded in the heart of regime’s nuclear program and that this is what the mullahs’ regime has been trying to hide.

Q. What do you think is the solution then?

As it has been previously stated on various occasions, any agreement that does not contain the following conditions will keep the pathway to bomb open. The conditions are:

a. Full enactment of all UN Security Council resolutions regarding the Iranian Regime’s nuclear program.

b. A halt on enrichment of uranium.

c. Accepting the additional protocols and allowing unconditional inspections into the regime’s sites and centers by IAEA experts.

But I guess the key question will be how to fulfill these conditions, given the current state of affairs and regime’s continuous deceitful policies. The answer is that the past years trend of negotiations prove that giving more concessions to the mullahs in Iran will get us nowhere. If there is a chance, it will be on taking a firm position against the mullahs’ continuous breach of the UN resolutions, and by imposing more restrictive sanctions, the same policy that enforced the regime to come to the negotiations table to begin with.

Of course, the final solution for preventing the fundamentalist and terrorist regime in Iran from acquiring nuclear bomb is the regime change which can only be realized by the people of Iran and the Iranian Resistance. Therefore recognizing and supporting the Iranian people’s aspiration for democratic change would make the most contribution in preventing mullahs from acquiring nuclear bomb.