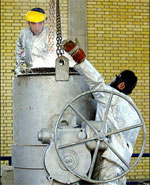 NCRI – Iranian regime rejected any plans denying its will to enrich uranium in the country. "As we said before we want to have enrichment inside Iran. Any proposal which is based on this principle will be studied," Spokesman to Ahmadinejad’s government, Gholam Hossein Elham, said on Monday. This is considered a clear rejection of the Russian proposal to enrich uranium for the regime on Russian soil.

“We are studying the Russian proposal based on this framework, the government will never give up its principles,” the spokesman declared.

On Sunday, Ali Larijani, mullahs’ chief nuclear negotiator rejected the Russian offer to produce nuclear fuel in its plants arguing that the offer would deny the regime’s right to “be in charge of its own fate.”

He said the regime would be willing to have some, but not all, of its nuclear fuel produced outside the country.

Iranian regime also said on Sunday that it had developed machinery to separate uranium from its ore, part of its ongoing drive to become self-sufficient in nuclear technology.

The mixer-settler machinery was developed by the regime’s Atomic Energy Organization (IAEO), according to state television.

In August the regime announced another breakthrough in nuclear technology by using biotechnology to produce larger quantities of uranium oxide, or yellow cake, from uranium ore.

Yellowcake is processed and then enriched to produce nuclear reactor fuel or, if highly enriched, bomb-grade material.

Previous articleIran president in new diatribe against Israel
Next articleIran: A teenage girl to be executed