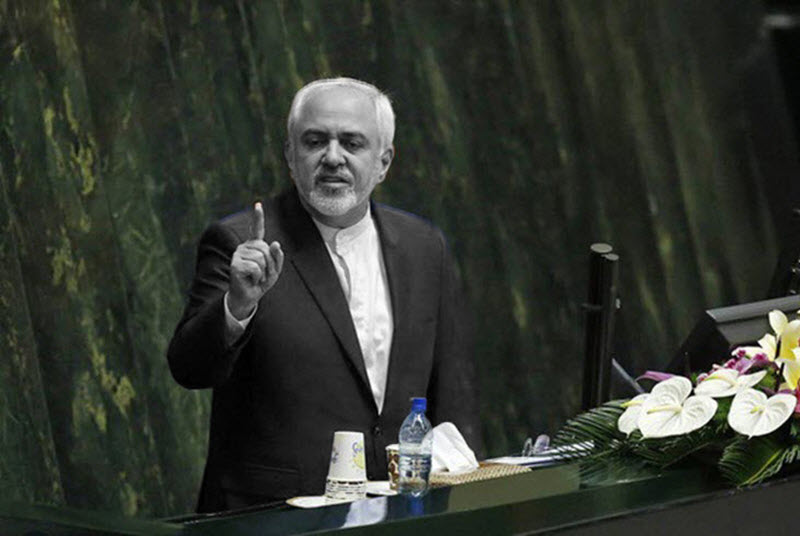 Iranian Foreign Minister Mohammad Javad Zarif was summoned to Parliament on Monday to be questioned over the economy and the 2015 Iran nuclear deal, known as the Joint Comprehensive Plan of Action (JCPOA), with MPs bringing up the sorry state of the economy and how the JCPOA has failed to bring increased trade and investment to Iran.

Zarif argued back that it is easy for the MPs to “criticise”, but that the Foreign Ministry is required to carry out the orders of the Regime leaders (i.e. President Hassan Rouhani and Supreme Leader Ali Khamenei).

Then, when questioned by MP Ali Adiani over a JCPOA document regarding the lifting of sanctions, Zarif said that in order for him to “raise all the necessary subjects”, the session would have to be held “behind closed doors”.

Adiani said: “Iran took part in the [nuclear deal] talks with the specific objective of lifting the cruel economic and financial sanctions… Mr Zarif, you must answer this question: Did we get enough guarantees? The statement issued by the European Union and the US President must specify clearly that these sanctions are fully lifted. Did we witness such a development? If so, where is the document? If it’s confidential, bring it for us to see. If it must not be published, the document will remain classified.”

Zarif claimed that due to national security, he would only answer that question behind closed doors, which certainly sounds like a lie.

Adiani said that the JCPOA, which he called the “most important event in the country’s history following the 1979 revolution”, was supposed to be implemented based on the Parliament’ nine conditions bill. He also said that Zarif had missed the March 18, 2018 deadline to provide him with the necessary documents for review, following their meeting on March 4.

Mohammad Dehghan, a member of the Parliament National Security and Foreign Policy Commission, asked what the reason was for the nine conditions raised in a Parliament bill in regards to the JCPOA. Zarif responded that the Foreign Ministry has repeatedly noted the measures that it carried out with regard to the JCPOA, especially since the US withdrew from the JCPOA, which again seems like he is dodging the question.

The reality is, of course, that the Iranian Regime is the party who first violated the nuclear deal by continuing to work on their programme in secret, which is why the US pulled out and why Zarif wants to hold talks behind closed doors. He is hiding something.

Previous article2018: A Year of Brutal Oppression in Iran
Next articleIran Regime’s Lies and Concealments in Atomic Projects After the Nuclear Agreement