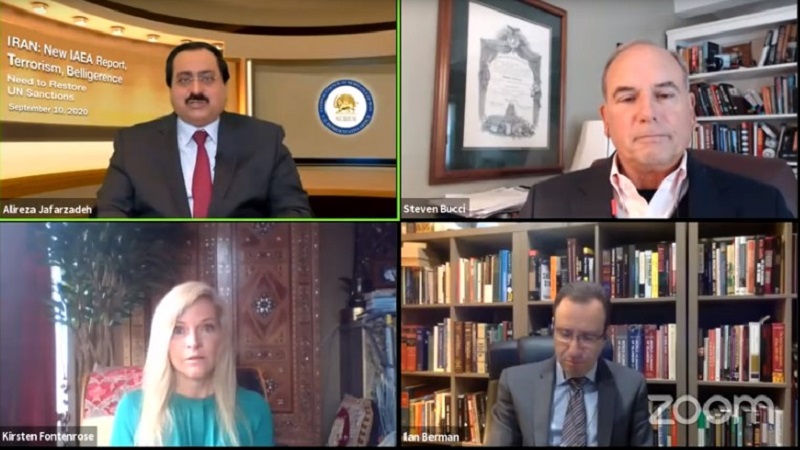 If anyone is surprised that Iran’s uranium is tenfold higher than the JCPOA limits, they just need to look at the regime’s record of cheating on its obligations.

NCRI exposed the Lavizan-Shian in May 2003. The International Atomic Energy Agency (IAEA) was allowed to visit the site thirteen months later. By the time they got there, there were no buildings and the whole site was razed. Even then, the IAEA had found traces of highly enriched uranium (HEU).

The regime stopped responding to the IAEA in 2008. The JCPOA swept everything under the rug, including the possible military dimension (PMD) of the nuclear program.

Another revelation was the Kalaye Electric facility, exposed in February 2003. The IAEA demanded access in 2003. They were not given permission to take samples until August. The regime had sanitized the site, but nonetheless traces of HEU were found.

Another example was the METFAZ site, exposed in 2009. The regime tried to move some of the operations to other places. Another component, the highly explosive chamber, exposed by the NCRI, was removed by the regime before access was granted to inspectors.

The most recent case was the Abadh nuclear site, razed in July 2019, when the IAEA requested access.

The regime has constantly caused delays and tampered with evidence. They have lied until their operations were exposed.

The fact that the IAEA has been allowed to go to some of these sites under tremendous international pressure does not mean the regime has come clean. They continue to try to cheat and hide the details of their operations.

There is a very significant impasse at the United Nations currently over the snapback provisions of the UN Security Council Resolution 2231. The initial strategy of the Trump administration was the extension of the arms embargo, which expires in October.

The arms embargo failed because it was opposed by China and Russia, which has to do with the strategic accord hammered between China and Iran. Russia supplies 21 percent of all arms being sold in the Middle East. They have a vested interest that the arms embargo is not extended. That is the backdrop of why the Trump Administration moved toward a more holistic approach of returning all sanctions.

The dispute at the UN is a dispute of standing. The legal language is clear. The original participants have the right to say Iran has not complied with the deal and can snapback the sanctions. It is baked into the resolution, so it has nothing to do with being part of the JCPOA or not.

.@ilanberman: The dispute at the UN is a dispute of standing. The legal language is clear. The original participants have the right to say Iran has not complied with the deal and can snapback the sanctions.#Noimpunity4mullahs #DisbandIRGC #UNGAhttps://t.co/lRkuJZdzUC

There are two pathways. One is for the international community to act. There is evidence that in some quarters in Europe there is a sense that ignoring it will make it go away. But it won’t. Next week, if the international community does not act, the U.S. will act unilaterally. I’m personally not a proponent of the term ‘maximum pressure’ because it implies we are already doing all we can, while there’s a lot more we can do.

The new findings of the IAEA suggest there’s been a massive expansion of Iran’s low-enriched uranium (LEU) stockpile. There is evidence Iran is installing new centrifuges at Natanz, and it’s blocking access to IAEA inspectors. There are still doubts about the international community’s ability to see the grand sweep of Iran’s nuclear activity.

Iran’s nuclear breakout threshold has reduced to three-and-half months. The reality is the provisions that exist today aren’t enough to prevent Iran from reaching nuclear weapons. Iran has a tendency to cheat and hide the details of its program and slowly engage in activities that allow it to reach nuclear breakout capability.

The UN is trying to maintain the status quo. If the UN doesn’t act next week, the action will shift to a unilateral approach, and all eyes will be on the U.S.

Conventional thinking among international analysts shrug the expiration of the arms embargo arguing Iran does not have the funds to buy weapons. But Iran has been speculating buying advanced weapons. Lifting the embargo will allow it to buy these weapons. Iran is also interested in upgrading its arsenal instead of buying new weapons.

And the question is whether Iran will be leveraging the lifting of the arms embargo to empower the Artesh (classic army) or the Revolutionary (IRGC). Iran favors IRGC.

Banned by the embargo are key parts used in explosively formed penetrators (EFPs), used to target American soldiers in the region. They are interested in anti-radar missiles.

Surface to air missiles (SAMs) are another acquisition of interest for the regime. There will be more advanced drones in the hands of Hezbollah and the Houthis in Yemen.

Kirsten Fontenrose: #Iran has been speculating buying advanced weapons. Lifting the embargo will allow it to buy these weapons. Iran is also interested in upgrading its arsenal instead of buying new weapons.#Noimpunity4mullahs #DisbandIRGC #UNGAhttps://t.co/mH0XsjHqdb

The regime’s low funds will not impede the regime’s capability to purchase these weapons. The regime will continue to move funds from other budgets to purchase weapons. There is also the possibility of Russia and China asking Iran to lease military bases in Iran in exchange for discounted rates.

Europe should investigate whether the IRGC plans like the bombing plot in Paris will become more dangerous should the embargo be lifted. Russia should take seriously the united letter by the GCC to extend the arms embargo. Russia and China will play both sides of a possible conflict that may emerge. Iran might end up hosting a Russian military presence that plays by its own rules.

If the embargo is not extended, the U.S. will impose sanctions on any company that sells as much as a screw to Iran’s weapons manufacturing industry.

The U.S. and Europe need to arrive at one voice on Iran’s weapons embargo and proxy activity. If Iranians elect a hardline president next year, there will be no nuclear deal. A hardline president in Tehran at the same time that the embargo ends is the ideal scenario for Iran.

The bigger problem is that this policy will not allow Iran to re-enter the global economy and community in good will.

I have fought the proxies and agents of the Iranian regime. This regime conducts foreign policy and diplomacy through terror. Their main way of conducting business with the community of nations is terror. They use their proxies to assassinate people, to destabilize nations. They smile benignly and say, “We didn’t have anything to do with it.”

.@SBucci: The #Iranian regime conducts foreign policy and diplomacy through terror. Their main way of conducting business with the community of nations is terror. They use their proxies to assassinate people, to destabilize nations.#DisbandIRGC #Iranhttps://t.co/srdx6O5G4c

The IRGC Quds Force is unique in its role across the world. The only analog is the Soviet Spetz Natz. The Quds Force has trained, funded and advised groups like Hezbollah, Houthis, Shia militias in Iraq.

Eventually, Iran’s goal is to have a crescent that goes through Syria, Iraq and Yemen. They think it is their divinely appointed role, and their main tool to do that today is the IRGC. It is an incredible, unfortunate situation that they have managed to get away with. And they are not the most expensive effort to fund by Iran, but they get prioritized. They got the lion’s share of the JCPOA benefits to allow them to continue these efforts across the region and the world.d.

The elimination of Soleimani was a victory for the people of Iran, Muslims in the region and anyone who opposes terrorism. He was not a diplomat. This man was playing a role that made him a legitimate target.

Going forward, we have to stop that funding, keep that funding away from the Quds Force. The funding of the Quds Force will shoot through the moon if the sanctions are lifted. You are going to see a lot more damage done. This has to be stopped, we cannot allow that to happen. If the world does not join the U.S. in this effort, the U.S. will have to go it alone. There will be an increased bloodbath around the region and other places in the world. We cannot allow that to happen, not only the United States but other countries as well.

They need to stay focused on the dangers Iran poses and keep the pressure on them, and I agree with Ilan, there is more pressure that needs to be applied. They have ignored the restrictions on their missile program, their nuclear program, and their destabilizing activities.

Iran must be stopped and the only way to do that is to pressure our allies to do that and to put more meat and teeth into the sanctions.