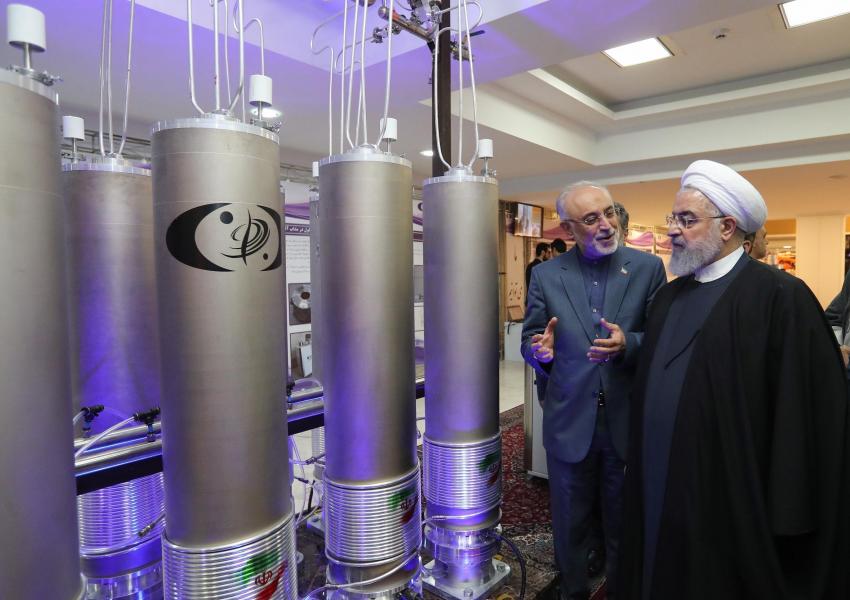 At practically every stage of Iran’s systematic violations of the Iran nuclear deal, so-called moderate officials like Foreign Minister Javad Zarif have portrayed themselves as being wary of the provocations, before promptly turning around and using the new status of the country’s nuclear program in order to reiterate and amplify demands for new concessions from the international community. This pattern was certainly on display in recent days as the Iranian regime moved to expand its nuclear enrichment to once again reach fissile purity of 20 percent.

Under the terms of the 2015 Joint Comprehensive Plan of Action, Iran was held to an enrichment level of under four percent and was barred from enriching uranium to any level in the fortified underground facility at Fordow. Iran slightly exceeded the enrichment limit in 2019, then halted compliance with all the terms of the deal in early 2020, leading to the installation of “cascades” of advanced nuclear enrichment centrifuges at the Fordow site. Last week, the International Atomic Energy Agency confirmed that Iran had begun using the new setup to enrich uranium to 20 percent, putting the country only a short technical step away from the 90 percent enrichment that is needed for nuclear weapons capability.

The move was naturally met with consternation from IAEA officials and various Western policymakers. But so far it has had little impact on Western policies for addressing the issue. The European signatories of the JCPOA, as well as the European Union as a whole, remain publicly committed to upholding the agreement by any means necessary, even as Iran’s latest violations prove that it is well and truly dead in the water. Their decision on this point has no doubt been influenced by the fact that “moderate” Iranian officials like Zarif are still insisting that Iran’s provocative gestures can be reversed and that there are voices within the regime that didn’t support them in the first place.

This is an illusion, but it is one that the international community has embraced on many previous occasions. It is emblematic of the Iranian regime’s effective use of a “good cop, bad cop” strategy, whereby the Foreign Ministry and the government insist that they are trying to cooperate with Western powers but are constrained by the competing priorities of “hardliners” like the Islamic Revolutionary Guard Corps. The IRGC, meanwhile, publicly urges maximum provocation and the reversal of earlier gestures like the signing of the JCPOA. As with any “good cop, bad cop” routine, the combined effect is to compel the subject to rush toward cooperation with one side in an effort to interfere with the other.

Of course, any well-run “good cop, bad cop” routine is also based on precisely the sort of illusion that figures like Zarif have been presenting to the international community throughout the four decade rule of the mullahs’ regime. That routine is only effective if its target really believes that there are two different entities, with two different objectives, in the proverbial interrogation room. But in reality, the good cop and the bad cop are always working toward the same end, in this case the removal of sanctions that have been imposed on Iran by the US over the past two and a half years.

There is plenty of reason to believe that this outcome is achievable, since the US is only days away from a change of administration and incoming President Joe Biden has signaled his willingness to return to the JCPOA. For what it’s worth, Biden has said he would only do so if Iran first resumed compliance with the terms of the existing agreement, but the latest developments raise serious questions about whether or not his European allies will see fit to support him in this. Much of the EU’s leadership seems willing to press for concessions to be offered from the Western side, in keeping with a long history of appeasement in the face of false overtures from Iranian moderates.

Now more than ever, this trend needs to be interrupted. It represents abdication of a strong position of negotiating strength by the Europeans and Americans, all for the sake of reaching out to opportunistic “moderates” who had no real interest in constraining the provocative impulses of their hardline colleagues. Foreign Minister Zarif has personally boasted to those colleagues that while Qassem Soleimani, the commander of the IRGC’s foreign special operations Quds Force, was still alive, the two men held weekly meetings to discuss and strategize their shared outlook on Iran’s foreign policy.

If Soleimani were still alive and still functioning as the regime’s top terrorist operative today, he would no doubt support the simultaneous friendly appeals from Zarif and provocative threats from his own IRGC. He would no doubt recognize that this dual strategy, this evocation of “good cop and bad cop,” has always paid off in the past by convincing Western powers to offer concessions to one faction on the promise of holding back the other. Soleimani would be prepared to exploit the situation all over again once the JCPOA is restored and IRGC is free to turn its attention elsewhere.

The death of the Quds Force commander was a strongly positive step toward increased global security and increased leverage over the Iranian regime. But another round of concessions from the West would go a long way toward reversing the gains. Even if Western policymakers felt they were dealing with moderates, they would be handing power right back to the hardliners, since the two factions are really one and the same.

With this in mind, both the US and the EU should focus their Iran strategies on the people’s side and on confronting the hardliners directly through continued pressure that would be effective in damaging the Iranian regime’s repression, promoting domestic revolt, and exposing the vulnerability of the theocratic regime.

Every contingent offer of a return to the status quo is an expression of that vulnerability, but the West should never cater to the “moderates” who make those offers. They never have represented the true intentions of the Iranian regime, and they never will. Their efforts to negotiate with the international community is only to pave the path for their hardline allies to pursue the true intentions of the regime and its malign activities across the globe.