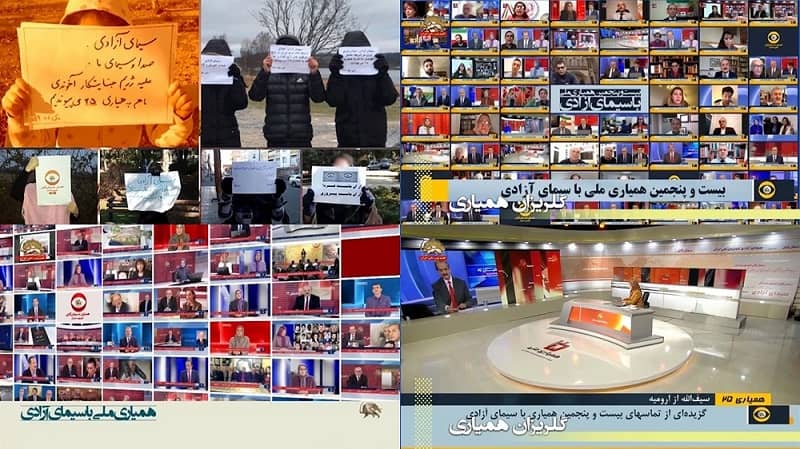 Simay-e Azadi, or INTV, an Iranian opposition satellite channel, held its 25th telethon on January 8, which lasted until January 12. Many Iranians, particularly from inside Iran, waited for hours to participate and express their support for the Iranian Resistance’s cause for freedom.

Simaye Azadi (INTV), a 24-hour free to air satellite television station that broadcasts from Europe, has a massive following inside Iran and the diaspora.

INTV has played a vital role in broadcasting images of the coronavirus crisis and the Iranian regime’s inhumane policies. This telethon was live on air for over 50 hours through four days, with over 100 telephone lines available for people to express their support. Iranians were also very active on the internet and social media platforms, including Telegram and Skype from inside Iran, rushing to the support of INTV and the Iranian opposition through all possible mediums.

This telethon also portrayed the Iranian people’s desire for freedom and showed another aspect of the Iranian Resistance’s root in society.

Members of the Resistance Units, an internal network of People’s Mojahedin Organization of Iran (PMOI/MEK), and many more defiant youths called in during this telethon, expressing their support for the Iranian resistance.

This telethon witnessed heartwarming yet moving calls by so many Iranians, particularly inside Iran. Many of those who contacted the program were suffering from illnesses, particularly the coronavirus. A man, identified as Farhad from Karaj near Tehran, contacted Simay-e Azadi and vowed to continue this struggle till the end, while he was breathing with great difficulty due to his lung infection.

Another person, Behnam from Tehran, counted Iranian people’s hardships in Iran under the mullahs’ regime and lashed western governments for their appeasement policy toward the regime and aiding the ruling theocracy. He also reflected on the Iranian people’s willingness to overthrow this regime, saying people will answer the regime’s 40 years of tyranny “on the streets” in their looming uprising.

The geographical scope of calls was also impressive. Iranians from all across the country and different ethnicities and expatriates in four corners of the world contacted Simay-e Azadi, waited for hours to speak on air, donated money to the opposition channel, and vowed to continue their efforts to bring about change in Iran.

Iranians inside the country praised INTV’s role in broadcasting the Iranian Resistance’s activities inside and outside Iran and exposing the regime, mainly the mullahs’ deception during the coronavirus pandemic.

Besides Iranians’ financial aid to INTV, their calls from inside Iran, under the regime’s suppression, showed the extensive support the Iranian Resistance enjoys among Iranians inside the country.

The telethon was a reflection of the Iranian Resistance’s strong political and social base inside and outside Iran.

The high volume of calls and messages from Iran also reflected a restive society and the Iranian people’s desire for regime change. The Iranian regime has often complained of satellite channels’ danger because of their popularity, especially Simaye Azadi.

The regime had tried to quell the Iranian society by its inhumane coronavirus policy in sending people to the Covid-19 minefields and using its mass casualties to prevent uprisings and spread despair among Iranians.

These calls and pledges by the Resistance Units and Iranians across Iran showed the regime has failed to quell the society.

Previous articleIran: Power Outages in Winter, a Result of the Regime’s Plundering Policies, Especially of the Revolutionary Guards and Khamenei’s Institutions
Next articleModerate Appeals Mask Hardline Intentions Regarding the Iran Nuclear Deal

On Wednesday, the Organization of Iranian American Committees (OIAC) held a meeting on Zoom. Participants were given the opportunity to listen to remarks from...
Read more
Iran News Now