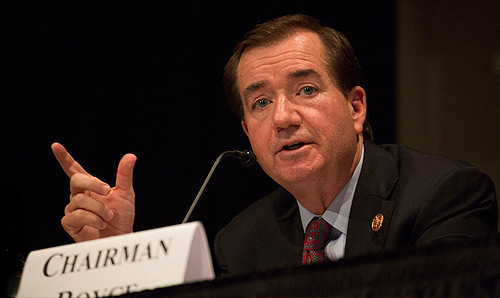 The Obama administration is at risk of offering “dangerous concessions” to the Iranian regime in an effort to strike a nuclear deal, Rep. Ed Royce, chairman of the US House Foreign Affairs Committee, has said.

“In Vienna, the Obama administration and its Iranian negotiating counterparts are spreading optimistic messages about their imminent deal and its promise to block Iran’s path to a nuclear bomb,” Mr. Royce wrote in the Orange County Register on Thursday. “The most soothing message came in a YouTube video starring Iran’s chief negotiator, Javad Zarif. Introduced by gentle music, the urbane Zarif earnestly and in perfect English tells viewers that ‘we have never been closer to a lasting outcome.'”

“If you didn’t know better, you might think Zarif was a stereotypical diplomat, rather than the Islamist radical who last year laid a wreath on the tomb of Imad Mughniyeh, the terrorist leader of Hezbollah who was behind the 1983 bombings of the U.S. Embassy and Marine barracks in Beirut that killed 362 people. Funded by Iran, Hezbollah’s mission is to annihilate Israel, routinely threatening nuclear war.”

“Of course, you won’t find any of this hateful rhetoric in Zarif’s video. Instead, he presents himself as a man of reason working for peace.”

“The Iranians have got the Obama administration exactly where they want it. Zarif and his boss, the Supreme Leader Ayatollah Khamenei, know that President Obama and Secretary of State John Kerry see the Iran deal as their chance to make history. This makes them willing to offer dangerous concessions.”

“The latest spin is that Iran will, at some point, own up to its secret history of nuclear development. We’re also told that international inspectors will get all the access they need to Iran’s facilities. Never mind that Iran’s supreme leader said recently that his military sites would be off-limits. Just relax, the administration tells us.”

“I might be more willing to believe these comforting messages if I hadn’t heard them before. About 20 years ago, I was on a panel with Wendy Sherman, then working with President Clinton on a ‘framework agreement’ to stop North Korea from getting a nuclear bomb. I was a new member of the Foreign Affairs Committee. But common sense told me that the Clinton administration was selling a bad deal, one riddled with loopholes.”

“Sherman dismissed my concerns. The Clinton administration told us that the genius of the North Korea deal was that it did not rely on us trusting this terrorist state. President Clinton told the American public: ‘This agreement is good for the United States, good for our allies and good for the safety of the entire world.'”

“Eight years later, the U.S. discovered the North Koreans were lying. They were able to secretly enrich uranium. In 2006, North Korea detonated its first bomb and threatens the U.S. and our allies to this day.”

“The Iran negotiations look to me like Groundhog Day. The script – and even a key member of the cast – is the same. I take no comfort that Wendy Sherman is today the lead negotiator on Iran, offering the same words of comfort. And we should take no comfort that President Obama, like President Clinton, is willing to reward a regime of terror with an agreement that looks as flimsy as our North Korean mistake,” Mr. Royce added.