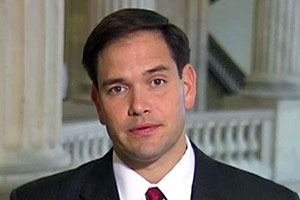 U.S. Senator Marco Rubio (R-Fla.) is predicting that the upcoming Senate will pass laws imposing sanctions on the Iranian regime next year.

“I think we’ll have a supermajority, a veto-proof majority, to impose additional sanctions on Iran and to require the administration to come before Congress for approval of any deal that [President Barack Obama] has with Iran,” Rubio said in an interview airing on Thursday.

“I think the same is true of the Keystone pipeline, potentially.”

Rubio said he would be prepared to vote for imposing sanctions on the Iranian regime as soon as today.
He aims for a bill that would require congressional approval for sanctions and impose them “upon a failure of the [nuclear] deal” within the next six months.

Fifty-four Republicans, 44 Democrats and 2 independents will make up the new Senate after a landslide midterm election that left Republicans with a clear majority.