Sen. Menendez: Suspend talks rather than accept a bad deal with Iran 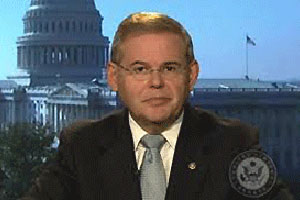 NCRI – US Senator Robert Menendez (D-N.J.) on Friday wrote to Secretary of State John Kerry denouncing the possibility of further concessions to the Iranian regime in international negotiations over its nuclear weapons program.

“I am writing to express my grave concern about recent demands by Iran’s Supreme Leader, Ayatollah Ali Khamenei, and Iran’s parliament rejecting critical elements of an agreement for a possible nuclear deal,” Menendez wrote. “If Iran insists on these redlines in negotiations, then I strongly urge you to suspend negotiations rather than accept a bad deal with Iran.”

Senator Menendez added: “On June 23, 2015, Ayatollah Khamenei made a speech on Iranian state television in which he stated that ‘All financial and economic sanctions imposed by the U.N. Security Council, the U.S. Congress or the U.S. government should be lifted immediately when we sign a nuclear agreement,’ that ‘inspection of our military sites is out of the question and is one of our red lines,’ and that freezing Iranian research and development ‘for a long time, like 10 or 12 years, is not acceptable. Only days before, the Iranian parliament voted to ban access to military sites, documents and scientists as part of any future deal with the P5+1 countries.”

“These demands are unacceptable – they presuppose that the government of Iran will act in good faith, when it has shown itself in the past to be an untrustworthy negotiating partner. The Iranian regime had spent decades deceiving the international community, it stands in violation of its international commitments, and it continues to deny the International Atomic Energy Agency access to its facilities and answers to questions about its nuclear-related military activities.”

“A deal that allows sanctions to be lifted before Iran’s government meets their obligations, without intrusive inspections to safeguard against a continued covert nuclear program, and that leaves Iran as a threshold nuclear state, is a bad deal that threatens the national security of America and our allies, and must be rejected.”

“If Iranian negotiators intend to adhere to the provisions demanded by Ayatollah Khamenei and Iran’s parliament, I urge you to suspend the current negotiations with Iran,” he added.

Menendez’s letter comes just four days before US and international negotiators are due to conclude a final deal with the Iranian regime to roll back its nuclear program in exchange for sanctions relief.

Read the full text of the letter here

The National Council of Resistance of Iran (NCRI) unveiled on Thursday a major report on the Iranian regime’s deceit tactics and strategies in nuclear negotiations with the world powers.

The report, unveiled by the NCRI’s US Representative Office in Washington, reviewed 12 years of negotiations between Tehran and the EU3 and P5+1. The report’s key finding was that the mullahs’ Supreme Leader Ali Khamenei has insisted on three red lines in the negotiations: barring inspectors from access to Iranian military sites and nuclear scientists and forbidding a halt to nuclear Research and Development (R&D).