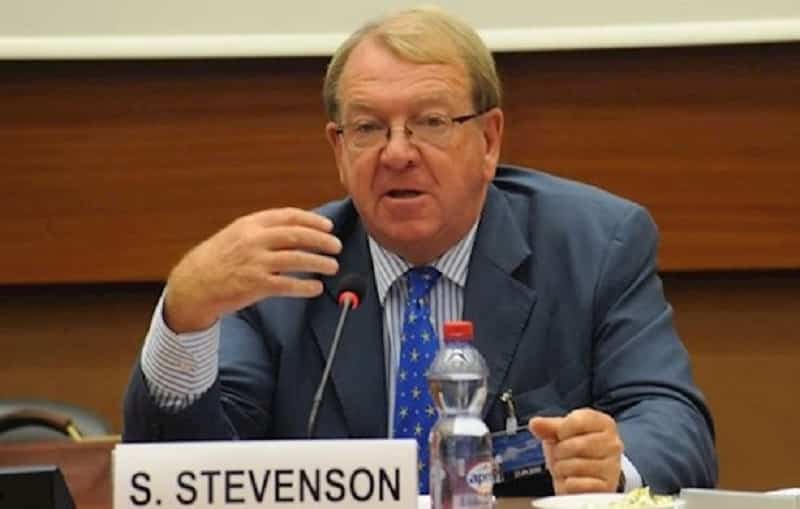 The National Council of Resistance of Iran (NCRI) exposed new details of one of the Iranian regime’s nuclear sites on Tuesday and elaborated upon the International Atomic Energy Agency’s latest disclosures regarding Iran’s undeclared prior nuclear activities. Struan Stevenson, a former Member of the European Parliament, also attended this event and urged the EU countries to put pressure on the regime for its nuclear activities and its state-sponsored terrorism.

The text of Mr. Stevenson’s remarks is as follows:

Ambassador Joseph talked about the American approach. Thank you very much, Ali, and thanks very much to Ambassador Joseph for those four very clear takeaways, which I think encompass exactly the position that we have to adopt. Because we know that the EU is desperately trying to encourage President Biden to lift sanctions on Iran and as we’ve heard, to rejoin this deeply flawed JCPOA nuclear deal. But, you know, as leading appeasers of the criminal regime in Tehran, the EU seems oblivious.

It doesn’t matter how serious crimes are. Joseph Borrnell, the high representative for foreign affairs and security, a top diplomat like he has not uttered a single word of criticism about the Iranian diplomat who was jailed last month for trying to kill hundreds of people in Europe with a bomb. On the contrary. Borrell has organised a three day EU-Iran business forum that is taking place right now as we speak today. Now, sadly for the EU, it looks as if appeasing the mullahs is the order of the day, issuing naked threats of an immediate return to an accelerated program of uranium enrichment, which is already a direct breach of the original nuclear deal, Javad Zarif, Iran’s foreign minister, says that his country will only return to the JCPOA if the U.S. and I quote here, unconditionally and effectively lifts all sanctions imposed, reimposed or relabeled by Trump. What can I say that rather than issuing threats to the West, Javad Zarif and the other leaders of the theocratic regime should be indicted for their clear involvement in deploying the diplomat, Assadollah Assadi, on a terrorist mission to Europe.

So I sincerely hope that the Biden administration will not follow Joseph Borrell’s example of barefaced appeasement. To do so would not only be a grave error, it would also be a humiliating defeat for America and a propaganda coup for the theocratic regime. In January, the UN nuclear inspectors announced that mullahs had begun to accelerate uranium enrichment and were aiming to produce low enriched uranium up to 20 percent purity, which is one step away from nuclear weapons grade. And the regime has repeatedly boasted about its violation of the JCPOA.

Despite clear evidence that the mullahs are continuing secretly to construct a nuclear device and ballistic missiles capable of carrying a nuclear warhead, the EU remain ludicrously committed to reinstating the nuclear deal. Moves to lift sanctions come against the background, which we’ve just heard from Ali Safavi, of new information released by the IAEA indicating the discovered uranium particles, at least two sites from which they previously been both. Well, you know, the nuclear inspectors, they managed to carry out snap checks on both of these sites, and they’re now demanding an explanation from Tehran for the presence of uranium.

The mullahs have long insisted that their uranium enrichment program was only ever intended for peaceful energy production purposes. But the Iranian intelligence minister revealed their true intentions, telling the press recently that Western pressure could push Tehran to fight back. He said like a cornered cat and seek nuclear weapons. So the truth was out. The international community should not buckle in the face of the mullahs blackmail strategy and thier tactic of extortion and hostage taking, as Ambassador Joseph said, which dates right back to the 1980s when the regime stormed the US embassy in Tehran and took numerous hostages.

The mullahs have continued to use hostage taking and terrorism to intimidate the West and achieve their goals. Iranian citizens with dual nationality are routinely arrested on trumped up charges of spying or trying to overthrow the regime. The US, EU and UN must hold the Iranian regime to account for its acts of aggression. Any concessions to the theocratic dictatorship will be seen as an act of weakness by the West and will be mercilessly exploited by the mullahs. There must be no lifting of sanctions until all clandestine nuclear activity, involvement in foreign wars and domestic oppression have ended.

The failure to link any reinstitution of the JCPOA to terrorism and the clerical regime in Syria, Yemen, Lebanon and Iraq, and insisting on an end to repression, torture and executions in Iran itself has simply encouraged the mullahs to further aggressive behavior at home and abroad. There can never be a return to business as usual with a regime that has abandoned all the norms of civilized behavior. President Biden must resist the mullahs campaign of bullying, extortion and blackmail and show to Iran that he is prepared to be tough.

Despite having the second largest gas and the fourth largest oil reserves in the world, Iran is crumbling, ruin the legacy of 42 years of corrupt and oppressive Islamic fundamentalism. President Biden and his Secretary of State, Tony Blinken, should think twice about reopening diplomatic relations with this pariah regime or indeed lifting sanctions in a bid to revive the moribund nuclear deal. The US, EU and UN must now begin a policy of backing the oppressed Iranian people and not their tyrannical rulers.

Previous articleIran’s Economic Crisis: Rising Prices and Scarcity of Poultry
Next articleIran’s State-Run Media: Protests Are Fire Under the Ashes