Struan Stevenson: Is the Iran Nuclear Deal Going to Collapse? 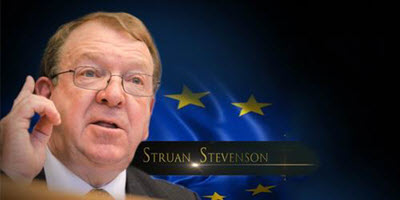 The Joint Comprehensive Plan of Action (JCPOA), commonly known as the Iran nuclear deal, was signed in Vienna on July 14, 2015. It was widely promoted by U.S. and EU officials as a foreign policy breakthrough, although much of the detail was kept under wraps. Only now is the true picture beginning to emerge and it makes for disturbing reading, writes former European lawmaker Struan Stevenson.

Last week the Associated Press published a leaked document which showed that the deal will allow Tehran to enrich uranium 11 years after the agreement was implemented and not 15 years as previously announced. The Iranian regime reacted furiously to this revelation, claiming that the West was now guilty of violating the agreement by leaking this secret information to the media. The speaker of the Iranian regime’s Parliament – Ali Larijani – has gone even further, claiming that: “The hostile measures against the nuclear deal have reached a point where Iran was left with no choice but to confront.”

The head of the Atomic Energy Organization of Iran (AEOI) Ali Akbar Salehi has said the nuclear deal stipulates that if any party violates it, then Tehran can go back to enriching uranium at an even higher capacity than before the agreement was signed, Mr. Stevenson pointed out in an article for The Diplomat on Thursday.

It has now become clear that the deal was quite one-sided, containing page after page of clauses relating to the lifting of sanctions, in return for which we got very little, apart from a few scant paragraphs detailing Iranian cooperation in slowing down its nuclear enrichment process for a period of up to 15 years, which we now know in fact to be much less. As far as scrutiny of the nuclear program is concerned, regular inspections by the International Atomic Energy Agency (IAEA) are limited to the Natanz site in Isfahan Province, the country’s main underground nuclear facility with over 19,000 operational centrifuges. Natanz itself was first revealed by the PMOI opposition group in 2002; until that point it had been a closely guarded secret site.

The agreement states that: “Iran will permit the IAEA regular access, including daily access as requested by the IAEA, to relevant buildings at Natanz.” The fact that only ”relevant” buildings will be accessed and only at Natanz is perhaps indicative of how Iran intends to restrict inspections to the bare minimum. The West was reassured by a clause that stated: “For 15 years, the Natanz enrichment site will be the sole location for all of Iran’s uranium enrichment related activities including safeguarded R&D.” So that’s all right then, we can trust the Iranian regime who previously hid all their nuclear facilities, to centralize their nuclear enrichment processes at one site which will be open for regular inspection! The agreement goes on to say that access is prohibited to all military sites, which of course is where most of the on-going nuclear activity is now concentrated.

It should be remembered that Iran entered into nuclear negotiations because, following the whistleblowing of the Iranian resistance, sanctions had crippled the Iranian economy. Nevertheless to capitulate to almost every Iranian demand exposed a level of weakness that has been eagerly exploited by the mullahs ever since. The lifting of sanctions released an estimated $150 billion in frozen assets, providing a windfall for a regime whose biggest export is terror; a regime which funds Hezbollah in Lebanon, Bashar al-Assad in Syria, the Houthi rebels in Yemen, and the brutal Shi’ite militias in Iraq.

Mr. Stevenson pointed out that last week the UN Secretary General Ban Ki-moon in a report criticized the Iranian regime’s regional and missile activities. The report stated that the ballistic missile launched by the Iranian regime in March was at odds with the U.N. deal and “not consistent with the constructive spirit” of the nuclear agreement.

Mr. Stevenson added: “Tension is mounting internationally as the flaws of the nuclear deal are repeatedly uncovered and Iran’s aggressive expansionist policy in the Middle East, to cover its internal fragility and weakness, is exposed. Tehran’s knee-jerk reaction to criticism is to accuse the West of violating the agreement and to call for retaliation, as was witnessed in last week’s UN Security Council when France openly criticized the Iranian regime, causing a furious reaction.”

“The U.S. Congress should continue closely to monitor and adopt tough measures to make sure that Iran cannot create further regional instability, disrupting peace and threatening international security. The West must not be passive when dealing with Iran’s continuous violations of the nuclear agreement and its aggressive regional interventions, terrorism, and human rights violations. It was hard-hitting sanctions that forced the mullahs to sit down to negotiate and thus we should take a tough line by imposing new sanctions for any further violations,” he added.

Previous articleMichael Mukasey: If Iranian regime falls, there would be virtually no problems in the Middle East
Next articleTehran’s paranoia over opposition Free Iran rally in Paris