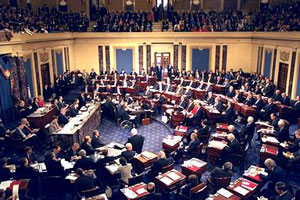 U.S. senators voiced their criticisms and doubts towards the nuclear agreement with Iran just a few days before the long-term agreement is set to be finalized.

“It seems to me that using the term ‘negotiation’ is a stretch,” said Sen. Roy Blunt (R-Mo.), The Hill reported. “Two years ago, we said things that we would insist on. Two years later, none of those things appear to be things that are still being discussed in these Iranian so-called negotiations.”

Sen. Ron Johnson (R-Wis.), member of the Foreign Relations Committee, said that the administration might not be able to get a “good deal” with Iran.

“I think we’re being played…a deal at this point would be very destabilizing. It would not be a good deal,” Sen. Johnson added.

Sen. Orrin Hatch (R-Utah) demanded that President Obama explain “what level of confidence he has negotiating with Iran given how it repeatedly violates the international community’s mandates with impunity.”

The three senators were part of the 98-1 vote to enable senators to review and vote on the finalized deal. Under the legislation, Senate Majority Leader Mitch McConnell (R-Ky.) can either bring up a resolution of approval, disapproval or do nothing.

For Sen. Lindsey Graham (R-S.C.), a presidential candidate, this deal could be a disaster in the making if it changes nothing in the end.

“I’d just walk away. It just amazes me that we don’t, quite frankly,” he said. “I think this deal is deteriorating before our eyes,” he said.

The South Carolina senator said that it would be a blessing if the deal turned out to be a good one, but if it is bad, it would be a “nightmare.”

Sen. Dan Coats (R-Ind.) expressed his fear saying, “that this administration is so seemingly, desperately eager for a legacy that it will choose to define any Iranian deal at all as a great success for diplomacy.”
Sen. Bob Corker (R-Tenn.), chairman of the Foreign Relations Committee, called the reported concessions that the administration has made to Iran as part of the talks “breathtaking.” The senator was instrumental to getting the Iran review legislation through the Senate.

Republicans aren’t the only ones who are doubling down on their doubts ahead of the June 30 deadline. New Jersey Democrat Sen. Bob Menendez said that he is “increasingly concerned” about the “moving of goalposts that move increasingly in the direction of Iran.”

Sen. Chris Murphy (D-Conn.) had previously said, “everybody knew that the final stages of the negotiations were going to be difficult.”

“We are closing in, I hope, on a historic nuclear agreement with Iran,” Carper said, adding that he believes negotiators are “hard at work,” said Sen. Tom Carper (D-Del.) he also suggested that a final deal must block Iran from getting a nuclear weapon, allows for “intrusive” inspections, and staggered sanctions relief.