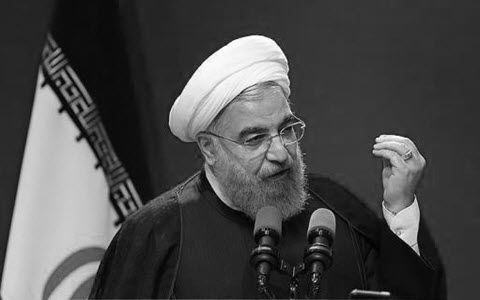 NCRI – Iranian President Hassan Rouhani in his remarks on Thursday once again referred to the wide rifts in the regime’s senior ranks.

“The fact that rifts are created in our society is due to our lack of tolerance. There are who prefer everyone to think like we do… Even the messenger [of Islam] was told you are not above the people to order them, and you are only obligated to show them the way, to allow each individual to choose for themselves. However, there are those who think they should issue orders upon people and that people are to obey their orders,” he said.

“In the [Ahmadinejad] government portions of the country’s economy was placed under the control of the military and security apparatuses under the pretext of privatization,” he said in reference to the Revolutionary Guards. He described these entities as the ‘armed government’ and acknowledged the fact that private sector cannot compete with them.

“Announcing the Principle 44 policies was aimed at placing the economy into the people’s hands, and for the government to not be involved in the economy. But what did we do? We handed a part of the economy controlled by the ‘unarmed government’ and handed it to an ‘armed government’. This is not privatization,” he said.

“They were afraid of that unarmed government. Now they have handed the economy to an armed government that controls all the media and everything else. No one dares to challenge it,” Rouhani added.

Elements of the faction loyal to Iranian Supreme Leader Ali Khamenei had already launched their assault on Rouhani through their remarks.

“Today, we see people portray issues in a variety of methods, and there are those who don’t realize who is the enemy? Some of our senior officials are repeatedly saying what is the Revolutionary Guards? What is the Basij? Why the crying? We want happiness and concerts… They portray the US as very pleasant and say America is no longer the Great Satan… however, they don’t dare express it so clearly, and yet they depict those who continue the struggle as hardliners and extremists,” said Mohsen Ejei.

“Now we have the right to say when the president said the military should have nothing to do with politics and economics, he was giving coordinates to the enemy to sanction the IRGC… The US Senate is seeking to sideline the IRGC’s activities,” according to a daily affiliated to the IRGC Basij.

This rise in political disputes resembles a deep rift after last month’s election, a divide that is increasing by the day.