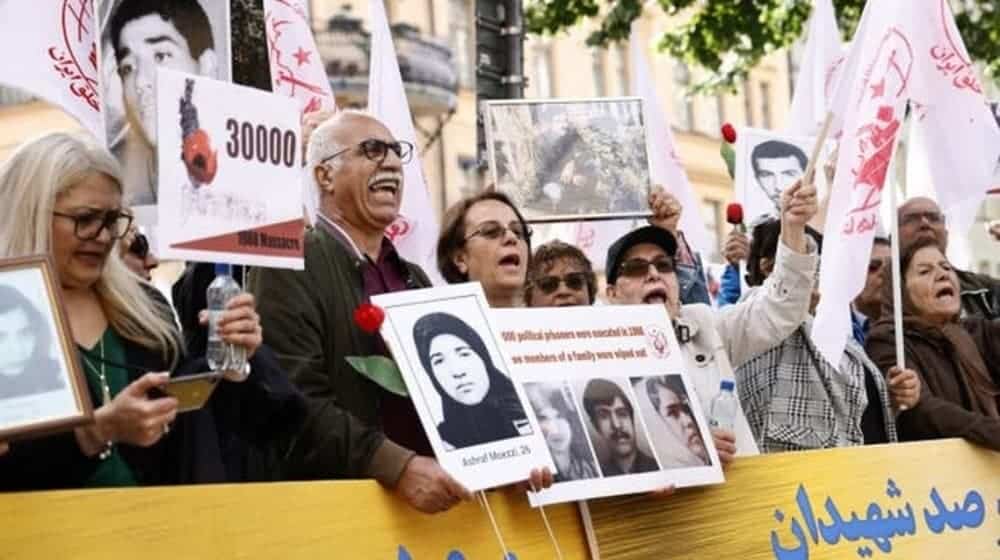 Iranians Chanted: “Mois Mercenary, Get Lost!”, “Murderer of Abadan, Your Trial Is Coming”, “Mullahs’ Embassy, This Spy Den Must Be Shut Down”

For the second day, a large number of Iranians gathered this morning outside a courthouse in Stockholm, where Hamid Noury was tried and protested against the ridiculous show of the Iranian regime’s Ministry of Intelligence (MOIS) mercenaries outside the court. They chanted: “Murderer of Abadan, your trial is coming”, “Mullahs’ embassy, this spy den must be shut down”, “mercenaries must be expelled”, “1988 murderer, your trial is coming”.

Fearing the powerful presence of the Iranians, the MOIS and its infamous branch, the Habilian Association, employed two recruited non-Iranian mercenaries to place placards and posters in addition to Shayan, a well-known mercenary who was present at the scene yesterday.

The police moved the mercenaries and their show away from the court and protected them. However, responsible and freedom-loving Iranians disrupted this ridiculous show, tore apart their placards, and spray-painted their cars. The mercenaries’ attempts to set up again their show were futile, and the two hired mercenaries left an hour later. Ten MEK supporters and Iranians were arrested outside Hamid Noury’s for confrontation with the mercenaries.

The demonstrators once again called on the Swedish government to arrest, prosecute, and deport agents and mercenaries of the MOIS and the terrorist Quds Force, and to revoke their citizenship and passports, as their sole mission is to spy and facilitate terrorist acts. The security of refugees in Sweden requires such a measure.