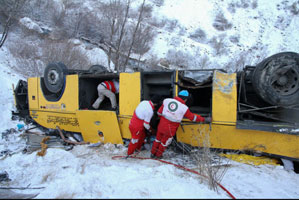 NCRI – A passenger bus has fallen from some 40 meters height from the main road in northern Iran killing at least 18 and injuring 25 others, state-run news agency ISNA reported on Tuesday.

The accident occurred at 04:15 local time.  The bus was heading to Tehran from Gorgan.

Road traffic accidents kill nearly 28,000 people and injure or disable 300,000 people a year in Iran, which has a population of around 75 million.

Based on these figures the number of victims of road accidents in Iran are 45 times higher than industrial countries.

World Health Organization figures show Iran has the fifth highest level of road deaths out of 25 countries in the survey, and the figure is worsening every year.