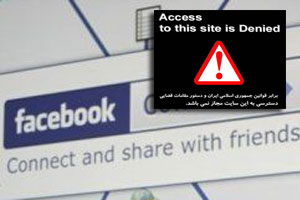 The ruling was published on his Website when he responded to question saying that: “Given the immorality that often applies to this, it is not permitted.”

The ruling came days after the Iranian regime has blocked WeChat.

Recently, an Iranian regime official declared Facebook as the “enemy” of the regime, and a cause of “public disorder” which with “hundreds of millions of pages of criminal content” is a threat for the regime’s “national security.”

In an interview with state-run Fars news agency on Sunday, December 8, a government official claimed that one of the problems about Facebook is that it has turned into a tool to support the dissidents in Iran.

Abdolsamad Khoramabadi, official from the board overseeing Internet in Iran, added that the Facebook was used for the “overthrow” of the regime in 2009.

The moral and security police chief also reported of hard controls over all social websites including Instagram and WeChat.

He said that the security forces are present in the virtual world of internet and monitor websites such as Facebook, Instagram and WeChat.

Previous articleU.S. acts to block Turkish firm from sending GE engines to Iran
Next articleStudents defy regime with ongoing protests in past week