IRAN: Cutting power cables and telephone lines could be Moharebeh 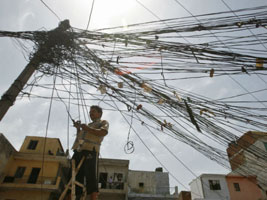 NCRI – A general prosecutor of the Iranian regime said cutting power lines, communication cables and telephone lines, water and sewage networks etc, are “acts of sabotage and disturbing social security and order” and will be considered Moharebeh (enmity against God) and corruption on the earth.

Ali Alqasimehr, the general prosecutor of city of Shiraz, said “the saboteurs of telephone and power lines will immediately be arrested and punished,” the state-run news agency ISNA reported on Tuesday (January 8, 2013).

“The procedure to bring to justice those involved in stealing the electrical cables in its entirety will be followed by the general prosecutor’s office of Shiraz,” the report added.

Alqasimehr said the punishment for “Moharebeh” could include execution, amputation of a leg or arm, and life imprisonment.

Recently the state-run news media have been reporting on numerous cases of theft of power cables of electric networks in the cities.  The poverty has been reported as the main cause of the thefts.

Previous articleIran: Cleric warns of danger for Khamenei in upcoming election
Next articleIran: What is the true inflation rate?