Iran: man attempts suicide for not having $100 needed to be hospitalized 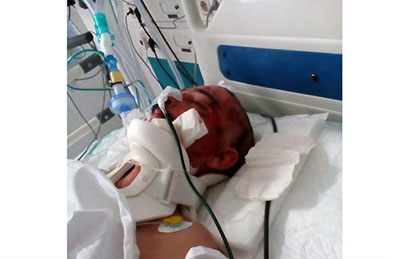 NCRI – Numerous Iranian state-media outlets have reported a heartbreaking story on April 30 of a 45-year-old man committing suicide in a Tehran hospital. He had suffered extreme stomach pains yet was not accepted into the hospital as his insurance booklet had expired and he didn’t have the less than $100 cash needed to be hospitalized. As he continued to suffer from his excruciating pains he threw himself off the third floor and is currently in a coma. This man is married and has two children under the age of 10.

“My brother, Ali Shafie, began suffering extreme pains in the stomach around Friday at noon, and he was on the ground with the agonizing pain. He was transferred to Tehran with a vehicle and brought to Milad Hospital. My showed his [insurance] booklet at the hospital, yet officials said it is expired and he has to provide three million rials (around $95). My brother said he is insured and the booklet was expired only a few days ago, and they can run a check through their system,” said Shafie’s brother.

“However, the hospital officials simply would not back down. They were demanding the three million rials. Neither my brother, nor those accompanying him, had the money. He was suffering from such pains that he finally decided to throw himself off the third floor.”

Shafie suffered serious wounds after this incident and is currently in a coma in intensive care.

“For three million rials they forced my brother into making such a decision. He is married, with two children under the age of 10. Now they say he is in a coma. One person says he is brain dead, while another says there is no hope for him,” his brother says with tears in his eyes.

In just one example, Nasser Saraj, President of the Iran Observation Organization said in an interview with the state IRNA news agency on November 25, 2015, “An individual was receiving oil from the Iran Oil Ministry and arrangements were made for him to pay the government in return. However, he stole around 1.6 trillion rials of this money (around $30 million) and fled to Canada.”

Based on a report wired by the state Fars news agency on April 14, 2016, former Iranian oil minister Mohammad Gharazi said, “The smuggling statistics in Iran is above $25 billion… yet there is no strong determination seen in officials and authorities to confront this phenomenon.”