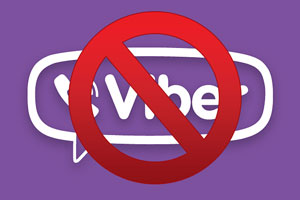 The users of the messaging service are not able to communicate using Viber application and even have difficulty in sending or receiving text messages.

Since January has been talks of possible blocking of Viber and a number of other messaging services in Iran.

Earlier this month the state Committee for Determining Criminal Web Content, responsible for web filtering announced that a number of messaging applications would be blocked.

Meanwhile, the Iran’s cyber police chief Brigadier General Kamal Hadianfar announced on Monday the regime’s plans to make the sale, purchase and use of VPN software – which disguises the physical location of Internet users – illegal throughout Iran.

But Handianfar said legislation to ban the software was now under review in the Judicial and Legal Committee of Majlis (Parliament).

A 2013 study found that almost half of the world’s top 500 most-visited websites – including those related to health, science, sports, news, and even shopping – are blocked in Iran. The regime is also one of three countries in the world to block Twitter, Facebook and YouTube.