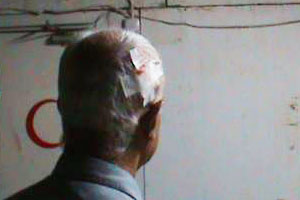 Mrs. Rajavi calls for security measure at the camp particularly the return of 17,500 protective T-walls and transfer of protective helmets and vests from Ashraf to Camp Liberty

NCRI – At 19:50 Baghdad local time on Wednesday (May 14), an AK47 rifle bullet that had been fired from the southeastern area outside Camp Liberty injured a resident after ripping through the roof one of the housing trailers.

The resident who received head injury was immediately transferred to the Iraqi clinic at the camp.

Camp Liberty has been the target of firing shots at numerous times in the past.

The Wednesday’s incident which injured a resident, once more, is raising the alarm about the danger and vulnerability due to lack of security at the camp and the immediate threats that the residents are facing.

The Iranian Resistance calls on the representatives of United Nations Assistance Mission to Iraq (UNAMI), the UN High Commissioner for Refugees (UNHCR) and U.S. Embassy in Baghdad to immediately meet with the injured resident, visit the place of incident and launch an investigation.

Mrs. Maryam Rajavi, President-elect of the Iranian Resistance, while reminding the U.S. and the United Nations on their written commitments for the protection and safety of the residents, demands urgent security measures for the protection of Camp Liberty, particularly the return of 17500 T-Walls, and transfer of the resident’s helmets and security vests from Ashraf to Camp Liberty.

Secretariat of the National Council of Resistance of Iran
May 14, 2014