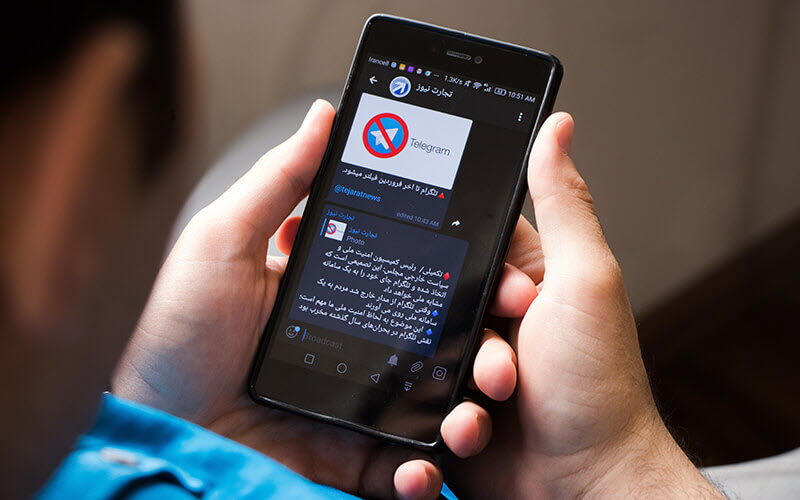 Boroujerdi said that Telegram would be inaccessible by the end of Farvardin – April 20– and replaced with a domestically developed and managed messenger, according to a decision made at regime’s highest level.

The remarks spurred a huge wave of protest, particularly in cyberspace, with some of regime’s MPs also involved.

In an article in state-run Arman newspaper on April 3, 2018, Rouhani-linked university lecturer Sadegh Zibakalam writes “let’s assume that Mr. Rouhani really opposes blocking Telegram. But everyone knows that he has not enough authority to prevent it from being banned. Neither Rouhani, nor the parliament, nor the Expediency Council, nor any other entity is in a position to prevent blocking Telegram. But the more fundamental issue is whether blocking Telegram could really be that effective, as it could be unblocked by using anti-filtering programs, the way it was used during January protests.”

“I wonder why the officials don’t ponder the political and social consequences of depriving young people of this space (Telegram), should they ever succeed to do that”, Zibakalam added.

Mohammad-Reza Badamchi, also a regime’s MP, has meanwhile posted on his twitter account “blocking Telegram will negatively affect 200,000 jobs and financially disrupt the lives of about half a million people. Mr. Rouhani has to prevent blocking Telegram through negotiations.”

In reaction to the oppositions, Boroujerdi once again came out in defense of blocking Telegram, saying “due to its security risks, many countries have blocked Telegram and replaced it with domestic, national messengers. As a distinguished country, we also need to follow suit.”

In response to Boroujerdi’s comments, state-run Entekhab website on Saturday March 31, 2018, writes “according to an informed source in the country’s Supreme Council of National Security, the reports about the contents of discussions held at the council this (Persian) year are quite unreliable as the Supreme Council of National Security has not had a single meeting this (Persian) year.” The Rouhani-linked website thus tries to absolve Rouhani of any responsibility in this issue.

The most important comment in this regard, however, belongs to Rouhani himself, who addressed the rival band on Tuesday April 3, 2018, saying “let’s not leave a sour taste in people’s mouth with such comments. Stop undermining employment opportunities while we’re already faced with an unemployment crisis.“ Rouhani thus tries to dodge people’s criticism and hold Khamenei directly responsible for blocking Telegram.

While pretending to care about the necessity to promote people’s welfare and security and the right to have access to free information, Rouhani added “Telegram is an informative tool, with 95 percent of its content being useful and only five percent regarded as problematic. So, we need to fix its content. Let’s not forget that 200 thousand jobs will be destroyed with blocking Telegram, so we need to take everything into account while making a decision in this regard.”
Among the two MPs responding to Rouhani’s comments on blocking Telegram was the spokesman for parliament’s Social Committee, who said at the end of a meeting with regime’s president “there’s been no such intention for blocking Telegram, and no relevant authority, entity or any other official has announced that Telegram is about to be banned.”

The fact, however, is that all such contradictory statements suggest that the decision to ban Telegram was actually made at first, but after weighing up the reactions in the past couple of days, the regime felt the danger and decided to back down; otherwise, Rouhani wouldn’t have spoken that way.

And the reason for regime’s withdrawal, as announced by regime official themselves, is that as the country’s number of Telegram users reaches 40 million, blocking Telegram would more than ever provoke resentment towards the regime, particularly considering the fact that – again according to regime officials – 200,000 Iranians earn their livelihood out of the messaging app. With Telegram made inaccessible –if ever possible technical-wise– the number will be added to the country’s unemployment figure, which by itself would be a serious crisis and a real security threat for the regime.

So, the reason for regime’s retreat could be summed up in one sentence: “feeling the danger!” a danger whose financial aspects were described above.

Considering the society’s eruptive state and particularly following the recent nationwide protests, regime’s danger-meter is currently too sensitive. Just like a painful wound that reacts to the least amount of pressure, the regime now becomes frightened even with the most insignificant signals it receives, and Rouhani’s recent comments proves that. Besides, Rouhani wants to deceitfully pretend to be opposing the Telegram ban and hold the rival band accountable for the decision, thus to gain something out of this!