Iranian Teachers’ Monthly Salary Down From $900 to Under $300 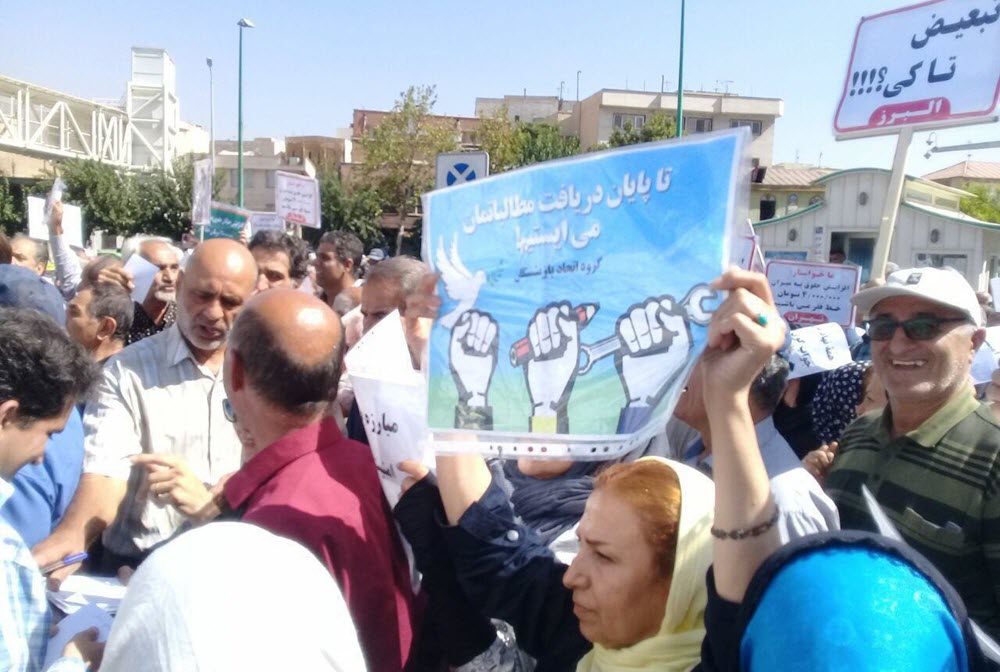 “Officials who set the minimum wage had better see if they can last one week with such salaries.”

While Iran’s economic fluctuations and sharp increase in the value of foreign currencies has put its heavy financial pressure on the country’s wage earners, there’s been a maximum 10 and 20 percent increase in teachers and workers’ salaries, respectively. But in a situation in which cost of living has skyrocketed due to sharp foreign currency appreciation, such small pay rises won’t be able to reduce people’s livelihood issues even a bit.

Pointing to ‘say no to your payroll’ online campaign launched by teachers, state-run ILNA news agency on July 17, 2018, has quoted Reza Moslemi, member of Hamedan Teachers Trade Union, as saying “the spontaneous move is teachers’ rational reaction to an unprecedented decrease in their purchasing power over the past few months. While teachers expected the government to at least keep their living standards unchanged, they are all of a sudden faced with a situation in which the government, that once boasted achieving a one digit inflation rate, has lost control of the economy, causing many low-income population, including teachers and workers, who were already below poverty line, to fall deeper to the bottom of the absolute hunger well.”

Moslemi points out that maintaining the purchasing power is far more important than just raising wages, saying “even the promised pay rises were not fulfilled. While government employees’ salaries were supposed to rise from six to 20 percent, teachers were given only a ten percent increase, which is not going to meet their needs at all.”

Moslemi then describes why the recent pay rise is insufficient, saying “according to State Services Management Act, government employees’ salaries should be raised proportional to the country’s inflation rate. The question now is how could a meager 10 percent increase in teachers’ salaries be proportional to the country’s real inflation rate? How much of the cost of living, which has multiplied in a short period of time, will this small pay rise cover? And most importantly, will the officials who make such livelihood related decisions be able to make ends meet for one week with such salaries? Why should they always enjoy the benefits while people have to suffer austerities?”

Moslemi then points to inefficiency of country’s budgeting system, saying “for years the Education Ministry’s management system has been trying in vain to convince the government to allocate a fair and proper amount of the country’s budget to the Ministry. It’s been years that ‘special’ quasi-governmental entities that are of no use for society have been funded several times higher than the Education Ministry, despite most sociologists and politicians believing that education ministry is the most important and fundamental entity in any country.”

“So, how much teachers’ purchasing power has decreased under such circumstances? To answer the question, we have to put aside the recent pay rise and go on the streets to find out how incapable teachers feel they really are with regard to earning their livelihoods.”

Moslemi compares teachers’ current purchasing power to what it was in 2011, saying “2011 was the year when currency fluctuations began, with US Dollar rising from 10,000 to 20,000 against Iranian Rial. Nonetheless, average teachers’ pay at the time was $900 a month. Today, however, a teacher’s pay is down to $300, even if he receives three million tomans a month.”

“The sharp decline in purchasing power is economically unconventional, acting like a strong earthquake to shake every aspect of people’s lives.”

“All wage earners, including teachers, are suffering from such sudden developments in the country’s economy, with no one taking the responsibility. While the government puts the blame on rentiers, MPs point their fingers at the government. We the wage earners meanwhile are the ones that will have to keep suffering.”

“The economy’s overall economic issues have to be resolved, otherwise our problems and livelihood issues will remain in place even if teachers’ pay is raised another ten percent.”