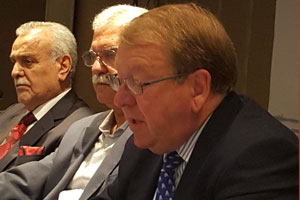 NCRI – The mullahs’ regime in Iran is systematically persecuting ethnic and religious minorities, former European lawmaker Struan Stevenson said on Saturday at a conference in Istanbul on Minority Rights in Iranian Society.

“Iran is a deeply corrupt country. Its fascist leadership thrives on oppression. Iran has many ethnic minorities – Azeris, Kurds, Arabs and Baluchis, among others. Also there are many religious minorities: The Sunnis live in many parts of Iran and are believed to number over 10 million. There also Christians, Jews, Zoroastrians and Baha’is,” said Mr. Stevenson, a former President of the European Parliament’s Delegation for Relations with Iraq and the current President of the European Iraqi Freedom Association (EIFA).

“But these minorities are victims of constant persecution. They face arbitrary detention, torture, unfair trials and extrajudicial executions, as well as the destruction of their cemeteries and holy places. These persecutions not only target the Baha’is, a religious minority not recognized by the Iranian Constitution, but also target Christians, Jews and even Sunni Muslims, Sufis and other branches of Islam.”

“Many Sunnis live in the capital Tehran, which has a population of 15 million in the city and its suburbs. But the regime has not permitted even one Sunni mosque to be built in Tehran; indeed a small Sunni prayer house was recently demolished by the Revolutionary Guards.”

Until the arrival of Khomenei, Iran’s ethnic and religious communities had been “living peacefully and fraternally together in Iran for centuries,” Mr. Stevenson said. “There are representatives of these ethnic and religious minorities in the opposition NCRI, fighting together for a free Iran.”

The National Council of Resistance of Iran (NCRI), Mr. Stevenson said, has “adopted plans for equal rights for different religions and ethnic minorities. For example they emphasize that the government cannot deprive the rights of anyone for their beliefs or non-beliefs in a religion, nor can they grant special advantages to them. According to the NCRI, an Iranian lady, who may be Kurd or Arab or Sunni, can be elected as the President. The NCRI plan for the autonomy of Iranian Kurdistan, according to many Kurds, is very progressive. These are the plans which have been adopted by the NCRI and have to be implemented in a future free Iran as far as the NCRI are concerned.”

Mr. Stevenson also highlighted the plight of Iranian women under the mullahs’ rule.

“Women are treated as an inferior species and regularly abused and repressed by the misogynist mullahs. Many young women have been blinded and disfigured in acid attacks condoned by the State simply for the offence of not wearing their veil properly. Unfortunately the West and particularly the EU have closed their eyes to these crimes.”

He also referred to the 1988 prison massacre by Iran’s regime of 30,000 dissidents over their affiliation to the main opposition group People’s Mojahedin Organization of Iran (PMOI, or MEK).

“One of their biggest targets for arrest, imprisonment, torture and execution is the PMOI or MEK. Over 30,000 of them were summarily executed on the direct orders of Ayatollah Khomeini in the 1980s in a pogrom of such ferocity that it shook Iran. Nevertheless, it caused barely a stir of criticism in the West. Today, supporters of the PMOI face a mandatory death sentence under the Iranian Constitution for ‘Waging War Against God!’ It is interesting to note that this organization is not Christian or Sunni, or Kurd or Arab. It is a political movement, which is really a sample of all the religions and nationalities of Iran, although the majority of the 30,000 murdered by Khomeini’s fatwa were in fact Persian Shi’ia.”

“It is through repression, violence and terror that the Iranian regime responds to peaceful calls to put an end to attacks on minority rights.”

“More than 2000 people have been hanged under the so-called ‘moderate’ leadership of President Rouhani, many of them were Sunnis.”

“Whoever takes up the challenge of countering Iran should be certain of one thing; there is a credible Opposition movement waiting in the wings to take over power from the evil mullahs.”