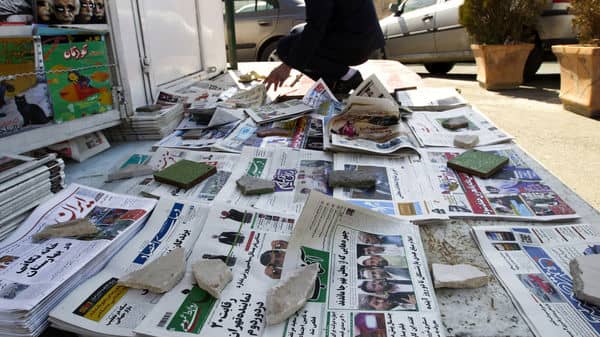 A glance at Iran’s state-run media shows the regime’s fear of another uprising and the Iranian opposition People’s Mojahedin Organization of Iran (PMOI/MEK). They also acknowledge society’s restiveness and people’s economic crisis due to the regime’s mismanagement.

“In its biased report, the Foreign Affairs Committee of the UK House of Commons made accusations against Iran’s security agencies and called for action against the Islamic Republic,” wrote the state-run Etemad daily on Thursday.

“This report has been prepared in the presence of a very limited number of MPs with a completely hostile approach. [The report is] based on the analysis and recommendations of the MEK in their latest attempt to influences future developments,” Etemad added, quoting Hamid Baeidinejad, the regime’s Ambassador in the UK.

Of course, Hamid Baeidinejad, and his boss Javad Zarif are the last people who should comment on the issue of terrorism, because their colleague Assdollah Assadi is being tried in Belgium on the charges of a terrorist plot in Paris. Iran’s regime foreign ministry, through its embassies, is the main facilitator of regime’s terrorism in Europe.

The Iranian Resistance has been defending the Iranian people’s rights and exposing the regime’s malign activities in the world. The MEK and the National Council of Resistance of Iran (NCRI) presented the world with information about the regime’s nuclear weapon program and the subsequent danger it posed to the world community.

The Iranian Resistance’s ground-rooted diplomacy has helped this independent movement to persist on its goal of liberating Iran from the yoke of religious fascism beyond any balance of power in the world.

The regime has acknowledged the victory of the Iranian Resistance’s diplomacy, although in its terms, many times.

“For many years, the MEK, through intensive activities, has paved the way for extensive congressional action against the [regime]. We have not forgotten that in July, the majority of the US House of Representatives (221 votes in favor) from both the Democratic and Republican parties ratified H.Res 374 supported the [Iranian opposition], its leader [Mrs. Maryam Rajavi] and their goal of [overthrowing] the Islamic Republic,” wrote the state-run Mostaghel daily on December 12.

These articles reflect the regime’s fear of the MEK’s role in mobilizing the international community and leading the society against the regime. Following the major Iran protests in 2019, which rattled the regime’s foundation, Supreme Leader Ali Khamenei acknowledged the MEK’s leading role in the uprising. He said the MEK had “planned for months” for this uprising.

While the regime tried to use the Covid-19 crisis and its mass casualties, through a cover-up and inaction, as a barrier to the uprising, the MEK, by announcing the real statistics, brought about the failure of the regime’s criminal policy.

This is another issue that the regime’s officials and media are concerned about.

“Some 4,000 people in Albania are publishing material against Iran. Considering all of this, some will claim officials have injected a foreign vaccine or water,” Iran Harirchi, the regime’s Deputy Health Minister, told the state-run Etemad daily on December 13, outraged by the MEK’s revelation of the regime’s failures and mismanagement of the pandemic.

Harirchi’s comments and outrage are not unfounded. The restive society, alarmed by the MEK’s revelation, will undoubtedly react to the regime’s deception.

In this regard, Mohammad Reza Mahboubfar, a member of the Coronavirus Taskforce, warned: “If other countries start the vaccination while we are still waiting, society’s tolerance will end.”