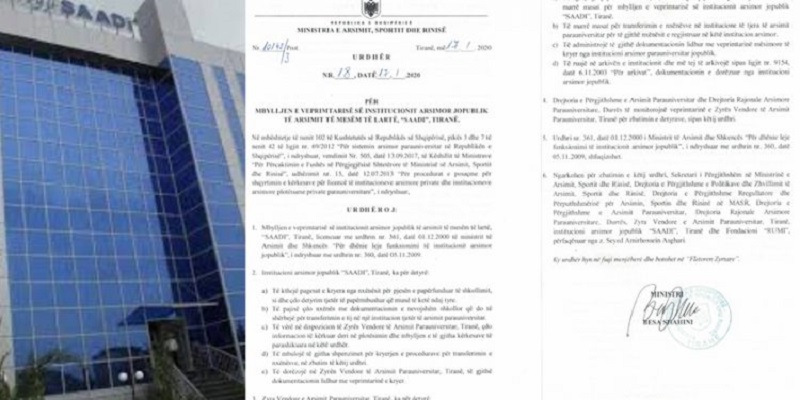 Saadi College in Tirana closed as one of the Iran’s regime cover-ups and fundamentalist institutions.

On January 15, 2020, Albania expelled two of the regime’s so-called diplomats. The country’s foreign ministry released a statement in this regard. A local Albanian TV station, “Top Channel,” reported:

“The Ministry for Europe and Foreign Affairs has decided that the representatives of the Iranian Islamic Republic in Albania, Mohammad Ali Arz Peimanemati and Seyed Ahmad Hosseini Alast, are declared ‘persona non-grata’ for conducting activities that go against their status and against the principles of the Vienna Convention for Diplomatic Relations.”

In March 2018, the Iranian regime’s terrorists were arrested while attempting to bomb a Persian New Year gathering by members of the main Iranian opposition group People’s Mojahedin Organization of Iran (PMOI, Mujahedin-e-Khalq or MEK). This meeting was attended by the President- elect of the National Council of Resistance of Iran (NCRI), Mrs. Maryam Rajavi, and several political dignitaries such as former New York Mayor Rudy Giuliani.

Last October, the chief of police in Albania revealed further details about the plot and said that the security forces had managed to foil it in the very last stages before the attack was to be executed.

The Albanian government declared last week that the two expelled diplomats of the Iranian regime, Mohammad Ali Arz Peimanemati and Seyed Ahmad Hosseini Alast, were expelled for “activity incompatible with their diplomatic status” – a phrase that has previously been used in cases of spying.

Mrs. Maryam Rajavi had previously described the Albanian Government’s expulsion of two Iranian regime’s diplomats as a courageous and commendable step in combating terrorism and ensuring the security of the people of Albania and Iranian refugees. She called on other countries to follow Albania’s lead.

Mrs. Rajavi said: “The Iranian regime’s representations are epicenters for espionage and terrorism. Most regime diplomats are either Intelligence Ministry agents or IRGC officers or have received training on terrorism and espionage to serve that purpose. With the Iranian people calling for the mullahs’ overthrow in the streets, it is particularly important to adopt a decisive policy vis-à-vis the regime’s terrorism and shut down its embassies in other countries, she underscored.”

Other European countries must learn from #Albania. Representative offices of the Iranian regime are centers of espionage and terrorism. #Iran

Following the nationwide Iran protests in November which shook the regime’s pillars of existence and the elimination of the Revolutionary Guards (IRGC) Quds Force Commander Qassem Soleimani, the Iranian regime has been desperately trying to somehow eliminate its real foe, the MEK.

Previous articleProtests Across Iran by Different Social Classes
Next articleIran Protests: Torching Pictures of Khamenei, Soleimani in Tehran, And Other Iranian Cities