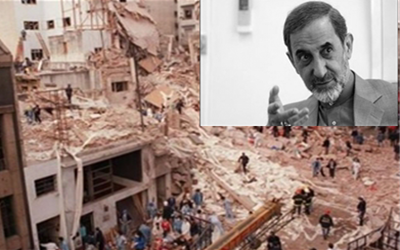 NCRI – An Argentine judge is requesting that Singapore and Malaysia arrest a top adviser to the Iranian regime’s supreme leader who is accused of masterminding the South American country’s worst terrorist attack, The Associated Press reported.

Ali Akbar Velayati was the Iranian regime’s foreign minister at the time of the 1994 bombing of the AMIA Jewish community center in Buenos Aires and is now an adviser to Ali Khamenei.

Velayati is visiting Southeast Asia to attend a regional summit.

Former Iranian officials have been on an Interpol capture list for years, but Argentine prosecutors have never been able to question them.

Eighty-five people were killed in the AMIA bombing, which came two years after a similar attack – also involving an explosives-laden truck driven by a suicide bomber – on the Israeli Embassy in the city left 29 people dead.

After years of inconclusive inquiries and alleged cover-ups under previous governments, President Nestor Kirchner on taking office in 2003 pledged to get to the bottom of the bombing conspiracy.

He appointed a special prosecutor, Alberto Nisman, who after in-depth investigations determined that Iran’s regime had masterminded the AMIA bombing and tasked Hezbollah to carry it out.

In 2007, Argentina asked Interpol to issue “red notices” – a rough equivalent of an international arrest warrant – for eight senior Iranian officials and a top Hezbollah terrorist suspected of involvement.

Interpol complied with the request in the cases of the Lebanese suspect and five of the Iranians. The Lebanese man, Hezbollah terror chief Imad Mughniyah, was killed in a bomb blast in Damascus in 2008.

Many feared the agreement would jeopardize the investigation and let the suspects off the hook. The U.S. State Department also expressed skepticism that the arrangement would see the perpetrators brought to justice.

Nisman, the chief AMIA investigator, also opposed the “truth commission” deal and in 2014 an Argentine court ruled it unconstitutional. The Fernandez government said it would appeal the ruling in the Supreme Court.

In January last year, a new scandal erupted when Nisman alleged that Fernandez and other officials were trying to shield the Iranian terror suspects in exchange for improved trade ties.

Fernandez denied the allegations. Four days later – one day before Nisman was due to testify before Argentina’s Congress about the allegations – his body was found in his apartment with a gunshot wound to the head. His mysterious death sparked large street protests and an investigation that is still underway.

According to the investigations by Prosecutor Nisman, the plan to blow up the Jewish center in Buenos Aires was discussed at a meeting of the Iranian regime’s Supreme National Security Council (SNSC) on August 14, 1993 by Khamenei, Ali Akbar Hashemi Rafsanjani (then President), Ali Akbar Velayati (then Foreign Minister), and Ali Fallahian (then Minister of Intelligence). Once the decision for the bombing was finalized, Khamenei tasked the intelligence ministry and the IRGC Quds Force with carrying out the bombing.

The current Iranian regime’s president, Hassan Rouhani, was also on the special government committee that plotted the bombing in Buenos Aires, according to an indictment by the Argentine government prosecutor investigating the case.

In the supplemented indictment, as well as the original one that was presented to court in 2006, the special prosecutor referred to press conferences, interviews and press statements by the National Council of Resistance of Iran (NCRI) and the People’s Mojahedin Organization of Iran (PMOI/MEK) that disclosed exact details of the Iranian regime’s role in this crime.

On August 10, 1994, three weeks after the AMIA bombing, in a press conference in Washington DC in the presence of dozens of reporters, the Iranian Resistance underscored that the AMIA bombing had been planned and organized by the Iranian regime’s Supreme National Security Council.