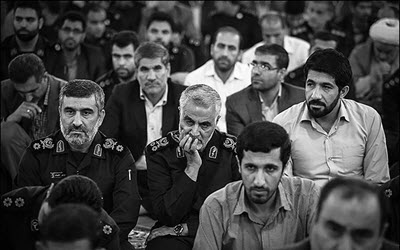 NCRI – Munich Security conference was regarded by Iranian regime’s media as a turning point in global and regional fight on terrorism.

Meanwhile, western and Arabic media are following the conference more than ever concerned with regime’s destructive role in the Middle East.

In an article titled “how the Iranian regime handles the war in Syria”, the German Berliner Morgenpost newspaper has reviewed the report provided by a number of western intelligence agencies on Iranian regime’s role in the Middle East.

“According to the information gathered by western intelligence agencies, the Iranian regime has strengthened its military presence in the Middle East following the 2015 nuclear deal”, writes Berliner Morgenpost, “This expanding influence in Iraq, Syria, and Yemen is quite noteworthy. The Iranian regime basically supported Bashar Assad during Geneva talks on Syria in which it was one of the participants. An issue which was also considered in Munich Security Conference, in which it was announced that the Iranian regime is part of the problem, and not the solution, with Saudi FM criticizing the Mullahs’ role, saying “the Iranian regime is the biggest state sponsor of terrorism in the world.”

“The Iranian regime has deployed a large military force in the Syrian cities of Homs, Hama, and Aleppo. The regime is also widely collaborating with Russia, the Syrian government and Hezbollah militias in Damascus. The war in Syria is handled by Ghasem Soleimani and the Revolutionary Guards’ Quds Force”, according to an intelligence report by western agencies on Iranian regime’s intervention in Syria.

The report also points to the presence of thousands of regime’s affiliated militias in Syria, including Afghan and Pakistani refugees as well as more than ten thousand Iraqi militias. “Besides, the regime has formed terrorist cells in southern Syria, in which it’s training militias who are mostly from Lebanese Hezbollah”, the report says.

Mentioning that nearly ten million barrels of oil and six billion dollars in cash are sent by the Iranian regime for the Syrian dictator every six months, the report also points to the regime’s increasing influence in Iraq. “the regime is looking for a bigger footprint in Iraq”, the report says.

“The Iranian regime has strategic reasons for supporting Houthis in Yemen as well, providing them with money and modern military equipments which are mostly smuggled to the Houthi-controlled port of Hudaydah in western Yemen through the Horn of Africa countries”, adds Berliner Morgenpost.

Previous articleProtests in Tabriz Madani University Against the ’80s Massacres
Next articleIran: Protest Rally of Thousands of Retirees and Tehran Transit Bus Drivers