David Amess MP: In the fight against Islamic extremism, moderate Muslims are our best allies 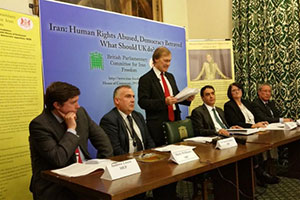 I remember almost a year ago, the enormous crowds that came together all across France, to rally against extremism. This rally showed everything that was great about French society. The rally did not blame all Muslims for the deeds of a few radicals misleadingly carried out in the name of Islam and it was not the familiar angry call for bloodshed and revenge that all too often follows these tragic events. However, these latest attack shows that when it comes to Islamic extremism, it’s not just enough to speak softly and rationally, we must put the stick about.

Let us be clear about what should not occur in the reaction to this latest round of bloodshed perpetrated my Islamic extremists. France’s Muslim population, Europe’s Muslim populations and especially refugees should not receive blame for the actions of a few. Yes, eight attackers are guilty. Yes, this attack like so many others was carried out under the name of Islam and that this is happening far too often. Yet we should not forget that the vast majority of Muslims would never support such violence, that during the last attack Muslims died and risked their lives fighting against these extremists and that refugees are escaping these extremists.

France and indeed the western world need to attack Islamic extremism at its source. This means relentlessly going after Daesh. However, it further means fighting against the theocratic regime in Tehran and its allies whose policies give life to those groups. Iranian backed militias committed massacres in Iraq and the Iranian government pushed the Iraqi government towards sectarianism. Similarly in Syria, the Iranian regime sponsored Assad’s brutal crackdowns, chemical warfare and torture against innocent people on an unfathomable scale. While these actions may not have created Daesh, they at least added tremendously to their strength and serve as its main recruitment agent, as the Prime Minister David Cameron and Secretary Kerry have pointed out repeatedly.

Tactics used by Daesh, both in France and elsewhere were also largely adopted from the post-revolution Iranian regime. One of the first and largest hostage taking situations was carried out by the regime in Tehran. Suicide operations and tactics of bombing targets abroad were additionally adopted which enabled a state apparatus that could provide funding, organization, equipment and diplomatic cover that regular terror groups could only dream of. Daesh is just the radical Sunni version of what was and is a radical Shiite invention of Iran’s Ayatollahs.

We have let the Iranian regime continue along its radical path and we keep paying a hefty price, from regional chaos to bombings abroad and beyond. We cannot continue to keep paying such a high price in human sacrifice for permitting Iranian extremism and we cannot allow Daesh to follow in its footsteps. If it were not for Tehran supporting Assad in Syria, he would have been gone several years ago and Daesh would never have multiplied. The bottom line is, Assad must go and in order to do so, we have to contain Iran.

Let us empower the moderate Muslim majority. Although it seems like a pipe dream given the sensationalist news coverage, the reality is there are many groups organised and on the ground that have a good track record against the scourge of extremism.

In Syria and Iraq, Kurdish groups and other moderate rebels are pushing Daesh back and fighting against the Assad regime at the same time.

In Iran too, there is an organised opposition, which has the support of an Iranian population sympathetic towards the West. This opposition is the National Council of Resistance of Iran (NCRI), which has large-scale support among Iranians inside the country and abroad. In what is unique for today’s Middle East, this organised opposition to the theocratic regime in Iran is led by a Muslim woman, Mrs. Maryam Rajavi.

In April 2006, she presented the NCRI’s 10-point platform for a future Iran that commits to the abolition of the death penalty, ending the use of torture in a future Iran and calls for a democratic, non-nuclear Iran with a clear separation between religion and state, gender equality and elimination of all religious and ethnic discrimination. The regime sees such a threat as a way to undertake an unprecedented spree of imprisonment, torture and murder.

By supporting these groups and fighting Islamic Extremism whatever its form, we will ensure a lasting, effective defence against the types of terror faced in Paris recently. Without resolve to fight and empower our allies, Islamic Extremism will just continue to threaten our free and open societies with barbaric atrocities.