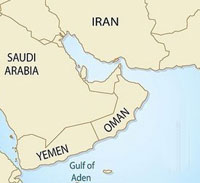 NCRI- An Eritrean opposition leader said on Sunday Iranian regime is using the Eritrean territories as a base for transferring arms to militants in Yemen.

Basher Esheq, an official in the Eritrean Democratic Alliance, told AFP in an interview that the Houthi rebels receive weapons from Iran through Eritrea; which is located close to the Yemeni-Saudi Arabian Western cities.

Basher added that the Iranian weapons arrive to Eritrea's coastal towns, particularly Assab City then Houthis deliver those weapons at night to Yemen.