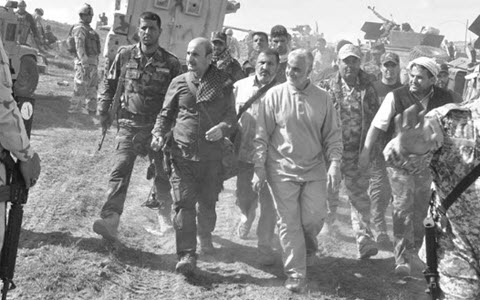 NCRI  – The former Deputy Director of the Defense Intelligence Agency has revealed that the Iranian Regime is taking advantage of the power vacuum left by ISIS across the Middle East; particularly in Syria and Iraq.

David Shedd, who served on the National Security Council under George W. Bush, revealed that he was deeply concerned by the narrow focus on defeating ISIS which failed to take into account that other oppressive regimes, like Iran, could and would exploit the void to take power for themselves.

He said: “The president has done the right thing by delegating additional authorities to the generals in terms of taking military actions against ISIS. I’m concerned, however, that notwithstanding the battlefield successes that Bashar al-Assad seems to be getting stronger or at a minimum, and he’s ensuring his consolidation of power with Russian and Iranian support… I’m also concerned about the outlook six months from now in Iraq in terms of the Iranian presence, as the Shiite victories are solidified in Iraq against ISIS as well.”

He expressed concern that the Iranian Regime was exhibiting more power in both Syria, where they are propping up the Assad dictatorship and massacring the Syrian people, and Iraq, where they ‘helped’ the Iraqi government to wage war against the Kurds following the independence referendum.

He said: “So this is a tricky one, in that the administration has loosened the rules of engagement against ISIS, which I believe is a good thing, but it’s failed yet to develop a strategic policy that fills the void, and now that void appears to be getting filled by Iranians and Russians and by extension the Syrian regime. In the case of Iraq, I’m very concerned about the Iranian militancy growing in strength and influence in terms of the territory, leaving aside the issue of the Kurds’ drive for autonomy.”

Shedd, who also served as Deputy Director of National Intelligence for Policy, Plans, and Requirements, would very much welcome a policy that looked at the wider implications in the Middle East to prevent the Iranian Regime being able to consolidate power and take over the region.

He said: “I don’t want to minimize that success when it comes to their approach to taking on ISIS, which has been to delegate authorities for many of those decisions to commanders in the battlefield associated with making those decisions. But that doesn’t obviate the need for a comprehensive strategy in areas where Iran and its allies have been gaining strength.”