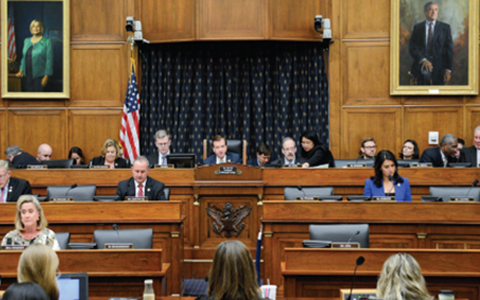 NCRI – The House Foreign Affairs Committee held hearings on Thursday, June 8 to investigate Hezbollah as a proxy force for the Iran regime.

The Chair of the House Foreign Affairs Committee, Ed Royce in the hearings stressed, “Hezbollah is a proxy force to the Iran regime and in fact, the Iran deal has enabled this country to provide Hezbollah with more equipment and facilities. Hezbollah is still an extensive criminal network, which is also engaged in a range of illegal activities such as trafficking, smuggling cigarette, and money laundering.”

The Chair of MENA (Middle East and North Africa) Subcommittee, Ileana Ros-Lehtinen also stipulated, “Hezbollah is one of the most dangerous and awful terrorist organizations in the world. This group is also responsible for some of the most brutal terrorist attacks in the history. Hezbollah is not only the partner of the Iran regime. It is also a branch of IRGC in order to fulfill the objectives and wishes of the Iran regime. Hezbollah supports the criminal Bashar Al-Assad in Syria by sending weapons and ammunition. We cannot ignore the influence and control of Hezbollah over Lebanon and its army.”

The Deputy of the Strategic Science Institute for Advanced Studies and the Member of John Hopkins University, Dr. Mara E. Karlin in the meeting also stated that Hezbollah constantly proceeds Iran’s plans. Nowadays Qasem Soleimani is the person who decides about the future of Hezbollah instead of Hassan Nasrallah.

As Dr. Karlin stated, Hezbollah always fulfills Iran’s wishes at any cost and time. The Iran regime wants Hezbollah to fight in Syria to the last gasp and it seems that Hezbollah follows the same goal.

The Senior Member of the Foreign Affairs Committee, Ted Deutsch said, “Hezbollah is a terrorist organization that has attempted attacks on several continents. Hezbollah’s terrorist attacks are not limited to any geographical boundaries. They bombed the US Marines barracks in 1983 and attacked a Jewish center in Argentina in 1994. Hezbollah’s role in Syria is probably the most worrisome issue in recent years. It is estimated that 7000 Hezbollah forces are now in Syria approximately. This group is considerably supported by the Iran regime and has helped the Assad regime and other militias in order to attack Syrians.”

He also stipulated, “There is no bright future for Syria while the Iran regime and Hezbollah military forces are present there permanently. The Iran regime has long sent millions of dollars to Hezbollah annually. It is a ridiculous idea to separate the political and military wings in Hezbollah. Therefore, I have recently proposed a resolution in order to call on the Europe Union to enlist Hezbollah as a terrorist organization in its entirety.”

The President of the Washington Institute for Near East Policy and the former official in the U.S. Department of the Treasury, Dr. Matthew Levitt stated in the meeting, “We have to impose sanctions on Iran since this country sponsors terrorism. Quds Force, Mahan Air, etc are involved in supporting terrorism and they should be enlisted as terrorist groups. These measures will never endanger The Joint Comprehensive Plan of Action (JCPOA). At the end, we absolutely need to coordinate and cooperate with our agencies against the network threats of the Iran regime.”

Previous article
Crisis Among Iran’s Credit Institution Escalated Over Past Week
Next article
Iran: More Rift and Crisis at the Top of the Regime, Khamenei Lashes at Rouhani