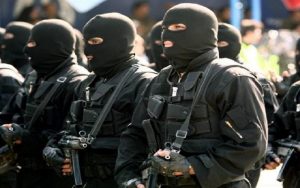 Last week, Iran’s hardline paramilitary, the Islamic Revolutionary Guard Corps, seized a South Korean-flagged vessel in the Strait of Hormuz, apparently as part of a bid to strong-arm the South Korean government into facilitating the release of seven billion dollars in Iranian assets that remain frozen in accordance with US sanctions. Subsequent developments have seen Iranian officials promoting a familiar narrative that says the IRGC’s strategies do represent the regime as a whole. Unfortunately, many Western policymakers still fail to see through this false narrative.

There is really no excuse for this blindness. As Tehran sets about using the tanker as a bargaining chip, it is also using a familiar strategy that may easily be compared to “good cop, bad cop” interrogation tactics. The Iranian officials who are currently negotiating with the South Koreas are actively portraying themselves as innocent bystanders in this situation, while the IRGC and other hardliners are tacitly threatening harm to the ship’s sailors and to the future security of international shipping unless they are appeased.

This moderate/hardline divide is a false dichotomy, but one that allows some Iranian officials to play the good cop by arguing that concessions are needed in order to constrain hardliners whom they otherwise have no control over. Presently, this strategy is being applied to frozen assets in the context of a detained ship, but in the past it has also been used to obtain concessions from the West regarding everything from individual prisoner swaps to the 2015 nuclear deal.

There must come a time when the international community recognizes this strategy for what it is, and ceases to accept that Iran’s “moderates” and “hardliners” are truly at odds with each other. Fortunately, there are signs that growing numbers of Western policymakers are adopting appropriately skeptical views of the Iranian regime.

Still, there is some ways to go before Western attitudes are uniformly in favor of treating both those factions the same. In the meantime, it remains all too plausible that the European Union will go on promoting friendly discussions with Iranian government officials like President Hassan Rouhani and Foreign Minister Javad Zarif, while refusing to hold them accountable for the actions of hardline entities like the IRGC.

Western policymakers’ outlook may not be directly relevant to the tanker situation, but their perspective has strong potential to influence policymakers throughout the free world as they consider how to interact with the Iranian regime under current circumstances. Talks between Iranian officials and a visiting South Korean delegation began just days after the seizure took place, and there was no indication that the Koreans received any note of caution from those who have grown more familiar with Iran’s provocations over the years.

Had Western powers adopted appropriately assertive policies in their own right, they would surely find the motivation to remind allies elsewhere in the world, including the Koreans, that their interests do not in fact overlap with those of Iran’s so-called moderates. Quite to the contrary, figures like Rouhani and Zarif have a long history of openly cooperating with their supposed hardline adversaries. In 2019, Zarif even went so far as to boast to state media that was holding weekly meetings with Qassem Soleimani, the commander of the IRGC Quds Force who, early the next year, was killed by a US drone strike while planning terrorist operations in Iraq.

Reminders of such “moderate/hardline” coordination should be queued up and ready every time an incident like the tanker seizure takes place and government officials attempt to portray it as being out of their hands and against their will. Such claims are always deceptive and they always represent tactics that have been effective in securing concessions for the theocratic dictatorship in various situations.

If South Korea happens to agree to the release of Iranian assets, that decision may not turn out to be a particularly egregious example of this trend. But purely by virtue of being the latest example, it will necessarily raise concerns about what other concessions may lie ahead. This is alarming for a number of reasons.

If the international community gives Iran the impression that the narrative of moderate/hardline divisions is still plausible, the regime will be even more likely to try exploiting that narrative to pin violations of the nuclear deal on hardliners. New concessions, or at least a total lack of accountability, would then be pursued by the “moderates” while much of the world remains ignorant to the fact that these two factions are one and the same.

There is no telling how many other ways the regime might seek to exploit that same narrative just in the year ahead. But it is easy to see what sorts of incidents that narrative would be applied to. There would be more seizures in the Strait of Hormuz, more questionable arrests of foreign and dual nationals inside Iran, and perhaps more violations of the nuclear deal motivated by perceived offenses that the entire regime publicly agrees upon, even as the hardliners seem to act alone in issuing new demands before sending forth the moderates to negotiate for them.