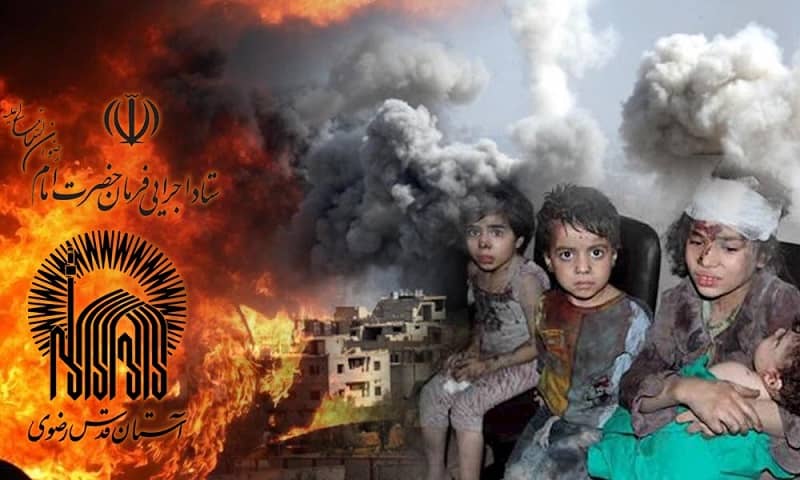 On Wednesday, the United States Treasury Department sanctioned Astan Quds Razavi (AQR) and Execution of Imam Khomeini’s Order (EIKO), plus their subsidiaries and four other individuals including Ahmad Marvi, the AQR’s current caretaker. These two huge financial institutions controlled by the Iranian regime’s Supreme Leader, Ali Khamenei, are the regime’s resources for plundering the national wealth and funding terrorism.

“These institutions enable Iran’s elite to sustain a corrupt system of ownership over large parts of Iran’s economy,” said U.S. Treasury Secretary Steven T. Mnuchin. “The United States will continue to target those who enrich themselves while claiming to help the Iranian people.”

“Today, the United States is imposing sanctions on two organizations controlled by the Supreme Leader of Iran, the Execution of Imam Khomeini’s Order (EIKO) and Astan Quds Razavi (AQR). While masquerading as charitable organizations, EIKO and AQR control large portions of the Iranian economy, including assets seized from political dissidents and religious minorities, for the benefit of Supreme Leader Ali Khamenei, his office, and senior Iranian government officials,” said Mike Pompeo, the U.S. Secretary of State in a press statement.

“These institutions enable Iran’s corrupt leaders to exploit a system of ownership over a wide range of sectors of Iran’s economy. The United States will continue to target entities and individuals that enrich themselves while claiming to help the Iranian people,” Secretary Pompeo added.

In this regard, Behzad Nabavi, a government minister in several administrations, in an interview with the state-run Alef news agency on September 21, 2019 revealed some information about this issue. “In our country, there are four institutions which control 60 percent of the national wealth. This includes Executive Headquarters of Imam’s Directive (Setad Ejraie Farman Imam), Khatam-ol-Anbiay Base, Astan-e Quds and Foundation of the Oppressed and Disabled. None of these institutions are in connection with the government and parliament,” he said.

The Iranian Resistance had previously exposed these two financial institutions, along with 12 other power houses, under Khamenei and the Revolutionary Guards (IRGC) control, and their role in funding the regime’s illicit activities.

In an exclusive report, published on November 8, 2019, the National Council of Resistance of Iran (NCRI) exposed the AQR’s role in funding terrorism and extremism.

“Astan-e Quds Razavi has played an active role in providing financial, material and logistical support to fundamentalist and terrorist groups within the last few years. Particularly, the heads of AQR have vast relations with Hezbollah’s top officials. It is worth noting that these activities within the past few years have been expanding,” read the NCRI’s report.

“Astan-e Quds Razavi, also supports family members of Iranian agents who have been killed, including members of terrorist groups like Hezbollah, as well as agents in Iraqi, Syria, Nigeria, and so on. The regime organizes pilgrimage and tourism in Iran and uses this for further terrorist and extremist recruitment.,” the NCRI’s report added.

“The Iranian regime uses foundations such as Astan-e Quds to circumvent sanctions and fund its oppressive and terrorist policies subsequent to the blacklisting of the IRGC and the expansion of US sanctions aimed at cutting off the regime’s economic resources, the regime has utilized AQR and similar entities to circumvent the sanctions and to finance its repressive and terrorist policies,” the NCRI wrote.

In a newly published exclusive report, the NCRI also exposed the role of the regime’s Setad Ejraie Farman Imam also known as EIKO or Setad in plundering the national wealth and funding the regime’s terrorist apparatus.

“Setad’s influence and domination over the Iranian economy surpass even that of the Islamic Revolutionary Guard Corps (IRGC). It is the most assertive of the so-called “non-government public sector” companies when it comes to the confiscation of assets. An important difference between Setad and other similar institutions in the sphere of the velayat-e faqih’s influence is that it has been able to take possession of some of the most profitable and largest commercial and financial firms, thanks to the direct and daily backing of Khamenei himself,” the report said.

The NCRI’s report highlighted that “A review of Setad’s activities also confirms that this complex is one of the most important interlocutors for transactions with western companies…. To strengthen the financial backbone of Setad, in 2010, Khamenei transferred close to $1B worth of assets from Astan-e Abdol-Azim in Rey city to Setad.”

Recently Khamenei banned the entry of credible Covid-19 vaccines from the U.S. and the United Kingdom. He persisted on production of so-called “domestic vaccines” which over 167 pharmacists have called a joke.

This so-called domestic vaccine is being produced under the EIKO’s supervision and by one of its subsidiaries. Thus, Khamenei and his foundation further plunder Iranians.

“The Food and Drug Administration is under heavy pressure to approve domestically produced vaccines and anti-coronavirus medicines. Because obtaining approval from the Ministry of Health means a huge profit for the drug owner,” wrote the state-run Jahan-e Sanat in this regard on December 14.

Khamenei, the IRGC and their financial power houses, are looting the Iranian economy and national wealth and wasting them on terrorism and oppression. While over 200000 people have died because of coronavirus, and while these institutions hold billions of dollars the regime has not allocated a budget for procuring vaccines.

These institutions and immense conglomerates control all aspects of Iran’s economy. Thus, doing business with the regime in Tehran means directly or indirectly funding the regime’s terrorist activities.

The European Union has been promoting business with Tehran, without referring to the dangers this trade will have for not just Iranians, but for EU citizens as well.

Iran’s diplomat-terrorist Assdollah Assadi and his accomplices, who are on trial in Belgium, tried to plant a bomb in the heart of Europe in 2018. Their bomb plot, if not thwarted, could have been the largest terrorist attack in Europe. The regime’s terrorist apparatus which planned and attempted this bombing is funded through various forms including by front companies, institutions, banks or the so-called “private sector.”

But behind the official banks and companies lies a web of institutions controlled by the regime, and specifically the IRGC and Khamenei.

Previous articleIranian Political Prisoner: Silence Is a Crime
Next articleHow the World Offers Concessions To Iran for Its Malign Activities